Lately, Calvin and I have been making some new friends. Yesterday, he had his second play date. I use the term play date even though Calvin doesn’t really play with the other kids—though perhaps he would if it weren't for the seizures and the drugs—just hangs out in their midst, which is nice enough. This time, Ellis, a girl in his first grade mainstream homeroom, came over with mom Kim and little brother Merrill. I barely know Kim, having just met her briefly in October, having shared margaritas with her and a friend last month and having visited over coffee one morning several days ago. But, to me, her friendship fits like an old shoe, all soft and warm and comfortable, the kind you could put on every day. We are alike in many ways, I think, and she wears her love and compassion on her sleeve, right under her long, loosely braided ponytail. She greeted me with a kiss and a jar of homemade spicy garlic wax peppers. I put on a pot of water for tea and gave the kids some crackers.

It was too nice outside to stay in. The weather was fairly mild, the ground mostly dry, so we donned our puffy coats and boots and headed out. Kim took the helm and stayed with Calvin while I traversed the yard searching for Rudy bombs. As the others explored a little, stepping gingerly, I scooped up five ample loads of Rudy Poop from the lawn. “That’s disgusting,” Ellis commented, surveying a huge pile of the brown stuff perched on the end of my shovel. “I know, really.” I said with a smile as I pitched the chunks into the shrubs. Ellis held Calvin’s hand, Kim the other, as we walked around the yard, Merrill buzzing between us while tossing a ball for Rudy. A biting wind came up and nipped at our cheeks and it got cold quick so we headed indoors.

Once inside I buckled Calvin into his jumper while the kids ate more Cheez-Its and peanuts. Merrill slipped Rudy some of his snack. “Don’t feed Rudy that stuff or he’s liable to get sick and you’ll have to come back and clean it up,” I joked. “That’s fair,” Merrill added in a very agreeable and amusingly adult tone, particularly for a four year old.

As Calvin was spinning, Merrill decided to give him some hugs. The two of them embraced like brothers, though to be honest I was a little afraid Calvin might passionately—though inadvertently—yank Merrill’s head off. It was cute to see the smiles on each of the boy’s faces. Everyone was happy and having a nice time.

“Calvin started a new medicine, right?” Ellis piped. “Yes, you know, don’t you, Ellis,” I replied, fondly patting her on the head. Kim emerged from the other room where Merrill had been cavorting. She held up one of Calvin’s empty foil drug blister packs that she must have found on the floor. “Please tell me this was empty,” she said smiling, though with a slightly worried voice. I confirmed, fully understanding her concern that Merrill might have scarfed some of the pills as if they were candy. “Yeah, and those are the ones that are like Valium,” I added woefully. That would not be good, I thought. “We keep those so Michael can take photos of the piles of Calvin’s empty medicine bottles and packets,” I explained.

After a nice long visit, Kim finished her tea, Ellis grabbed another handful of Cheez-Its and peanuts and slurped down her water. The kids both gave Calvin one last hug before leaving. “Will you guys come back and play again sometime?” I asked as I handed them a plastic baggy of crackers for the road. “Sure!” they chimed, and as they piled into their car I thought, how nice it is having new friends.

Please share Calvin's story. Help bring us one step closer to a cure for epilepsy. It's as easy as pie. 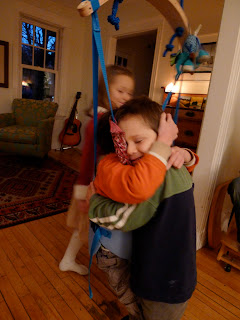