One year ago on Christmas day:

It has happened on Christmas before. With as many seizures as Calvin has, it’s bound to. And though they are becoming more frequent again—more than once a week—and they seem to be getting longer, we have managed to avoid the hospital, at least for now.

As Calvin lay next to me, shuddering and shivering in his post-seizure state, I gaze, from inside my melancholy, out the bedroom window at the indigo predawn sky. A flickering star appears framed closely by large, almost black trunks and bushy, sagging pine branches. Outside, in the bitter cold of the morning Rudy barks wanting back in. I imagine his hot breath smoldering in the frosty air. Michael is warming milk and making coffee downstairs.

Somewhere nearby a woodpecker’s hollow knocking echoes in the stillness. A second bird replies from farther off. These are the only sounds I hear besides Calvin’s shallow breathing and the rustling of soft flannel sheets. The bird’s resonant tapping, so stark in the placid, biting dawn, doubles the sound of Calvin’s wrists striking his forehead.

Calvin turns and reaches for me. I lean into him as he wraps his arms around my neck and pulls me close, his soft hands caressing my back and the hair at my nape. I nuzzle him and kiss his plump cheeks as he holds me repeating “uh-uh, uh-uh.” He will fall asleep this way, just as the sun begins to shine warmly on the tops of the trees.

Please share Calvin's story. Help bring us one step closer to a cure for epilepsy. 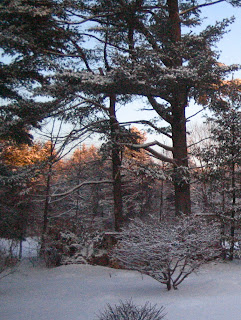