It’s an eerie, unsettling feeling sitting in a sterile hospital room glowing blue with sonogram equipment and bright screens while listening to the rush of air through hidden ducts wondering what kind of viruses are being pumped from one room into another. Alarmingly, the phone rings, “bloolaloolaloop ... bloolaloolaloop,” and I flinch, a nauseating, anxious feeling melting over me, like some Pavlovian dog stung with a cattle prod whenever a bell rings. And I find myself right back there, almost eight years ago, laying with my tiny, swaddled Calvin under crisp white hospital sheets in a waxy beige room where I don’t want us to be.

Yesterday, in the diagnostic imaging department of our local hospital, Calvin had a sonogram done on his kidneys. The technician squirted clear blue gel, like Dippity-Do, on the end of a warm probe that she held awkwardly, like a kid weilding one of those over-sized crayons, to the side of Calvin’s back as he giggled. Blood work that was taken last Monday in Boston had come back indicating the possible beginnings of problems with his kidneys and liver. Frigging seizure drugs, I thought, messing with my little boy’s delicate organs—yet another anticonvulsant side effect to add to the absurdly long index, a veritable grocery list of ills that I feed to Calvin twice every single day.

Floating in the screen was a blackish, kidney-shaped galaxy sprinkled with little white stars. “That’s echogenisis,” one of the techs said, somewhat unsure of the term, as the blob stretched and morphed like some amoeba under a microscope. In the dim light, Calvin turned onto his side, stuck his thumb in his mouth and fell asleep, his right hand appearing as if he were wearing a scarlet glove. We’ve seen this capillary flushing ever since he started taking the Keppra, wonder if it tingles or hurts but can never be sure since Calvin can’t tell us.

The technicians wrapped up and went to show the radiologist the images, leaving us in relative darkness listening to the electric hum of the gadgets, to the familiar, heavy metallic snapping of wide hospital doors, the muffled voices behind them perhaps talking about our child that they know nothing about.

Calvin and I lived in this hospital’s labor and delivery ward as “boarders” for three-and-a-half weeks after being released from the Maine Medical Center where he’d been for as much time just after his birth. The feeling inside the hospital became both comforting and unnerving, the sense of safety with doctors and nurses at our fingertips in case something went wrong intermingling with the real sense that we were imprisoned, couldn’t take our own child out the exit door without an alarm going off, couldn’t leave as long as he was unable to nurse and begin gaining weight without the aid of a tube. We'd been there so long sometimes I wondered if we’d become rooted to the vinyl bed, like a stick of furniture on cold linoleum that gets mopped around daily without notice.

In the night, every four hours a nurse entered the room, the sliver of light beneath the door becoming a large wedge. She’d check Calvin’s vital signs—his temp, his heart rate, his respiration—then sneak away, the door gliding shut with a solid click-CLACK. I’d wake and lean over the edge of the plastic tub that was Calvin’s crib, put my ear near his face to ensure he was still breathing. At barely five pounds he was so fragile, a shivering pup, not having been ready to enter the world six weeks early. Harsh, bright, cold, heavy world. And then I’d hear the moans and cries of women in childbirth, echoing down the carpeted hallway from who knows where—perhaps the next room over, the room across the hall, hard to tell, the grim sound muffled as if in a watery dream. I wanted out of there, to be in the comfort of my own home, it'd been so long and dreary, save for the happy visits of nurses who'd kept us under their wings as if we were family, of the pediatrician who was our cheerleader giving us hope with each passing hopeless-felt day.

Finally, the door clicked open and the tech told us we could go, that no more kidney images were needed and that we’d get the results in a day or two. I found it impossible to read her, wondered if the news was going to be bad ... again. We’re starting another chapter of this horror story, I thought, while trying to remain positive. Michael woke Calvin who remained drunk in residual sleep while we put his little puffy jacket on. Outside the sun made me squint but warmed my pale face, and we loaded Calvin into the car and spun around the circle drive like it seemed we’d done a thousand times before. I was thankful we were headed for home and as I watched the brick red of the hospital blur and disappear round the bend, so too did my anxiety as Calvin wrapped his arms around my neck and pulled me in close for one more of his slobbery kisses. 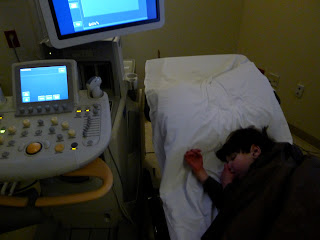