Little kids amaze me. Their minds are so open and pure, innocent and non-judgmental. Of course, I’ve met a few who defy that description, ones who seemed to emerge from the womb as tiny terrors, growing into mischievous trouble-makers, tormenting other kids and pulling dogs’ tails. You can see it on their faces—in their eyes—the desire to provoke. But even those kids are pretty darn cool if I crawl inside their little minds and think back to when I was their age and to what motivated me then.

When Calvin was around three or four and I’d take him to the grocery store, he’d sit in the cart, his skinny legs dangling through the bars with shoes too heavy for them, while he’d coo and giggle and rant. Other children, some barely old enough to sprout words, would point to Calvin and say to their mothers, “look at the baby,” and then, “that baby’s got glasses.” I always found this amusing since Calvin, though two sizes too small for his age, was clearly not a baby, but somehow that’s how they perceived him, and their impression had much merit. Calvin is indeed my big baby.

Sometimes I think, in some screwed up way, I am living some mothers’ dreams: having a child that never grows up. I’ve heard many mothers say as much, that they wish their baby could remain small and cute and cuddly forever, stay an infant. I remember bristling at the idea, thinking, if only they knew what they were saying, that if they lived my reality those words likely wouldn’t be passing over their lips. And I find myself with a child they think they wish they had—a big baby making baby sounds, doing baby things, even in some ways still looking like a chubby-cheeked baby playing with his feet and toes while I change his diaper, even though he is nearly eight years old.

Once every other Tuesday I volunteer read to the kids in Calvin’s mainstream homeroom class. It’s a way to get a shot of little kid normalcy, something I don’t get at home and have always loved. It’s also a way to give back to the community and to do what I do best, which is to instill confidence in all of the children, including the ones who don’t seem the brightest, maybe can’t read well or aren’t self-assured. Recently, one of Calvin’s friends, Summer, sat with me cross-legged on a nubby rug while I read Miss Fiona's Stupendous Pumpkin Pies to her. Every page or two we paused and giggled about the funny illustrations. At one point I asked her, “Have you ever heard of the phrase ‘you can’t judge a book by its cover?’” Summer shook her head as wisps of blond brushed her shoulders. I told her that Fiona the witch, although she wasn’t very pretty—in fact was kind of homely—was beautiful on the inside because she kindly made pies for everyone in the village.

When we closed the book Summer wanted to read a second one, but I told her that I needed to read to another child, to be fair. “Okay,” she said brightly, and skipped off to her desk. On my way out Summer came up to me, “this is for you,” and she handed me a sheet of white paper. I turned it over to see a wonderful pencil drawing of the three of us—me, Calvin and Summer—with two soaring birds and a large sun burning in the sky. I am pictured pushing Calvin in a stroller and Summer is reaching her arms out to us. Calvin appears tiny in his little stroller, like a baby, even though he is at least a year older than her and maybe as tall. “What a nice picture, thank you!”

Summer always manages to steal my heart. Come to think of it, somehow most kids just do. 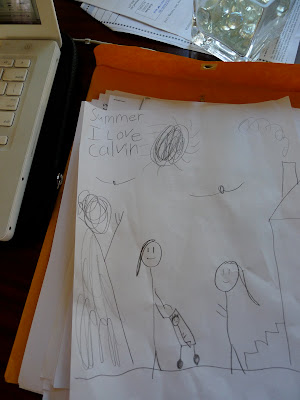 Posted by Christy Shake at 1:55 PM