it's all fun and games till calvin pokes an eye out

For weeks we've been trying to get to the bottom of Calvin's manic behavior. His nurses and doctors have thought it might be due to gastrointestinal stress from an impacted bowel, so we cleaned him out with a bunch of enemas and a colonoscopy prep but saw little improvement in his behavior. We've also been thinking he has esophageal ulcers from acid reflux and so started him on an antacid but after a week have seen little to no improvement in his screeching and coughing and cringing and flailing. It's hard to handle and I find my own agitation going from zero to sixty in no time flat as soon as Calvin launches into this behavior.

Bottom line is that it seems very clear to me and Michael that Calvin's lunacy—though likely exacerbated by gut upset—stems from the anticonvulsant drugs, either from his dependency on the Clobazam, a benzodiazepine related to Valium, some hyperactivity from the Banzel and/or the Keppra which, of its top seven most common side effects—sliding in just behind somnolence, lethargy and dizziness—four of them are behavioral. Calvin is so crazy at times he retracts into a little writhing ball and rubs his wrists and forearms together like a couple of whittling sticks. At times when we're trying to feed him he is coughing or laughing so much that we worry he'll choke on a piece of food.

And, even on a relaxing car ride or lounging in a hammock, he flings his arms so wildly he's bound to pop us in the eyeball with an errant fist, box our ears or scratch our faces, though none of it intentionally or maliciously. Yep, it's pretty much all fun and games until Calvin pokes an eye out. 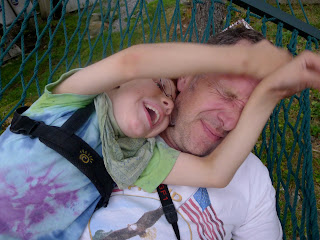 Posted by Christy Shake at 1:41 PM