This time last year I met a family that I've grown to love. This is the story of how our paths crossed:

I jumped onto the back of Michael’s motorcycle, wrapped my arms around his waist and we sped off to the next town over for an ice cream fix. When we arrived, we doffed our helmets and leather jackets and were greeted by a smiling blond behind a small window. She brought us our sugar cones piled high with cold creamy sweet stuff, and as we turned away from the shack a van pulled up beside us. A slender dark-haired woman, probably several years younger than I, stepped out of the passenger side and rolled open the back door. As I passed behind, her child peered at me from his car seat, his head slightly bobbing, a look of earnest on his sweet round face. Immediately, I knew the little kid returning my gaze was not just an ordinary boy.

His mother lifted him out and carefully set him on his unsteady feet. As she held his hand he did his best to walk a little, shuffling slightly as he did so. Like Calvin, he stumbled and had trouble keeping balance, each step an effort of coordination and strength. Watching the two of them from a nearby bench I felt as if I were having an out of body experience, as if I were somehow seeing myself with Calvin. Michael encouraged my desire to approach the couple to ask about their son. I was hesitant, not wanting to insert myself into the intimate lives of strangers, but we had nothing to lose and everything to gain. Plus, Michael said he’d go with me.

“What’s your son’s name?” I asked somewhat nervously. The woman, casually attractive with short dark curly hair and wearing a pretty black and white printed blouse, responded kindly, warmly, said he was five and a half. I introduced myself to her husband and shook his hand while remarking that I thought our son Calvin might have something in common with their boy. Her son, as she explained, has a very rare condition, with a long name I’d never heard of, that he shares with about a hundred other boys in the world. I mentioned Calvin’s seizure disorder and his other physical and developmental challenges and asked if her son had seizures too. She said something like, “not yet, that comes later.”

The boy sat quietly and steadily on the picnic bench leaning forward to take licks off of his father’s ice cream cone. I smiled. I wished Calvin could do that. I asked if he was their only child. When she said yes my throat tightened, and as I answered her same question my voice quivered, I had to take a deep breath. Michael and I don’t know any other families who share the reality of having an only child who is severely disabled. We must have so much in common, I thought to myself, and I desired to know everything at once—to open her mind, see into her thoughts, know her heart’s deepest feelings—to connect.

We happily exchanged email addresses on a flimsy white paper napkin torn in half. As we said our goodbyes I asked if she liked wine. Affirmative. I told her that perhaps a glass of wine was in our future. I am hoping so.

And, later last summer my wish came true and I've been living it ever since. 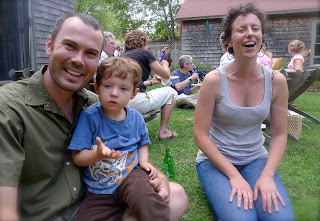