We set out this morning to do one of the few “fun” things that we can do with Calvin, which is to visit our favorite coffee shop in the next town over. There was a quiet, early snow adding a dusting on top of several feet already covering the ground in drifts and swaths.

In the car Calvin screamed so loudly that Michael and I couldn’t hold a conversation in the front seats. I am trying to teach Calvin that it is “not nice” to scream and to “settle down.” Perhaps one day it will sink in, but like everything else, it will take months, if not years, to learn.

In the coffee shop, standing between Michael’s supporting knees, Calvin’s shrieking morphed into ceaseless farcical laughter, reducing him to a flaccid noodle, wilting and dropping in a heap on the floor between Michael’s feet. Today, unlike most days, the cafe was fairly empty which only served to accentuate Calvin’s cackling. Sippy- cup, plate, knife and half-eaten toasted onion bagel with cream cheese flipped onto the carpet. We had barely just arrived yet it was already time to go home. I wondered if the antiepileptic drugs were causing Calvin’s crazy behavior. Probably.

Back in the car I swiped Calvin’s shod feet out of his mouth no less than twenty times. I was able to prevent him from yanking his delicate glasses off of his face sideways about half of his dozen attempts, and I dislodged his finger from his eye socket more times than I care to remember.

On the ride home, as Calvin’s screams echoed in my brain, I imagined happy families eating waffles and omelets in red vinyl booths at their favorite diners, sledding down snowy hills in bright plastic saucers, crafting snowmen with stick arms and rock eyes and skating on milky rinks, their reflections beautifully etched by sharp silver blades creating a frosty patina in the ice. I wondered if we would ever get to do these kinds of things with Calvin. Probably not. 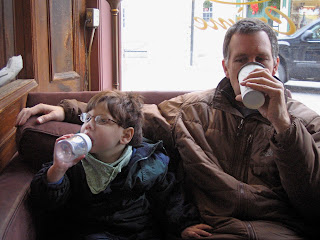