seventh spin around the sun

We celebrate our son Calvin's birthday a week from today. It is not in any way remarkable that he is already nearly seven—the years drawn out and somewhat wearisome—noting little change in his development. These long years have often been difficult, though sprinkled too, with joyfulness for the small advances he has made and for his apparent happiness. With each additional spin he makes around the sun, however, we focus and rejoice primarily for the fact that he is still alive.

Lately, I’ve been dreaming about losing Calvin. In a dream last week we were in a large, crowded shopping mall and Calvin simply disappeared. In my panic I worried that we wouldn’t find him amongst the throng of shoppers in time to give him his antiepileptic drugs. This image I feared the most. Then, early this morning Calvin awoke—as usual of late—at 3:30 and did not go back to sleep. In the meantime I catnapped and dreamed, occasionally waking to the dull thump of purposeful head-banging on his crib-side, then I'd temporarily drift off to sleep again. In my dream were three young neighbor boys—though strangers to me. They had come upstairs to visit Calvin in his crib while I was in the adjoining room. After I’d heard the boys leave I entered Calvin’s room. His crib was empty and he was nowhere to be found. The boys denied having seen him. Frantically, I looked everywhere in the house—under the crib, behind the couch, under blankets on a high-back chair—but Calvin had vanished. Then, thankfully, Calvin called to me from his crib and woke me from my anxious nightmare.

This fear of losing Calvin, that follows me into sleep, is difficult to restrain. I know too much about what epilepsy is capable of doing to a child like mine whose seizures are not under control, in spite of the powerful medications he takes to thwart them. I find that writing about it helps channel my adrenaline in a positive direction while at the same time raising awareness about this misunderstood disorder. Many who have read my posts have kindly and lovingly told me that it has enlightened them about epilepsy, that they are more appreciative of what they have and are better parents as a result of living vicariously through my words and photographs. I hope this to be true for many more.

If Calvin’s Story has touched you, and if you are able, please donate to epilepsy research in honor of his seventh spin around the sun. Go to:

Please continue to share Calvin’s story, whether by link or by word of mouth, and help bring us one step closer to a cure. It’s not hard. Just do it one story at a time. 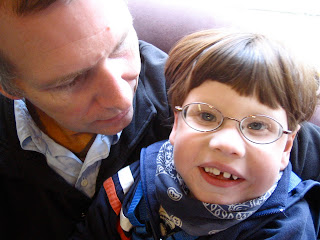