As each new year begins I hope it will be the year that Calvin outgrows his seizure disorder. But as the months flick by it feels less and less likely that that will be the case.

In February Calvin will turn seven followed by March, the unceremonious and infamous fifth anniversary of his epilepsy diagnosis. Due to the epilepsy alone, by then, he will have tried at least eight anticonvulsant drugs, at times as many as four at once. He will have been on two unsavory highly restrictive diets. He will have tolerated a half dozen 24 – 72 hour electroencephalograms and his second MRI. He will have endured a legion of painful blood draws, some successful, some not. And all of this Calvin must withstand because of epilepsy—because of hundreds of seizures that just won’t stop coming.

Certainly, the first few years since his diagnosis were the hardest to take. We began witnessing our child suffer frightening seizures during most of which he’d stop breathing and start to turn blue. At all hours of the day and night we called 911 because of status epilepticus, a serious, sometimes fatal seizure activity. Scores of times we spent weary hours in glaring, austere emergency rooms and were often transferred in dark ambulances, chains jangling eerily from their underbelly, to the pediatric intensive care unit thirty-five miles away from our home. At least three times we were faced with the dread that we might lose Calvin to a prolonged seizure, his body and brain being battered with convulsions. And, insidiously, we have had to subject Calvin to strong anticonvulsant medications that at times send him into mania and at others into oblivion, no doubt having stunted his development along the way.

Nevertheless, somehow I still hold out hope that he will outgrow this brutal fiend, though his chances are slim and getting slimmer. Perhaps we will find a silver bullet—a medication that will once and for all halt the throng of seizures that march reliably and repugnantly through his brain. More than anything, however, I hold out hope for a cure—a way for my Calvin to enjoy seizure freedom and liberation from the heinous side effects he must cope with—instead of wearing the unreliable bandage that is medicine, which is superficial at best and keeps coming off.

Our only hope for a cure for Calvin, and for millions of others afflicted by epilepsy, is through heightened awareness. So, with the advent of this new year please share Calvin's story with others. It's not hard, just do it one story at a time. 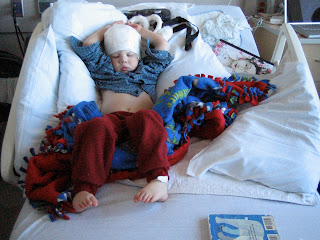