The other night I got Calvin ready for bed, something that Michael usually does. I had him sitting up on the changing table to take off his robe and slippers. He reached for me, put his arms around my neck and pulled me into a tight embrace, then he gave me a rare kiss on the nose—a nice long one. At that moment I became sorely aware of a familiar, weighty feeling that it could be the last time I’d be saying goodnight to my sweet boy, and to treasure the moment.

The next day I read about a new study that has determined that the mortality rate in individuals with childhood onset epilepsy, such as Calvin, is three times higher than once expected, at 24%. Two factors that play a major role in contributing to the high mortality rate are the lack of seizure control (referred to as medically refractory or intractable epilepsy) and the presence of remote symptomatic cause of epilepsy (i.e. major neurological injury or insult as a cause of epilepsy).

Unfortunately Calvin’s epilepsy is intractable. He’s tried eight antiepileptic drugs and two vigorous diets in the nearly five years since his diagnosis and his seizures continue to be reliable. Because Calvin was born with significant neurological complications of unknown origin, causing cerebral palsy, global developmental delay, low muscle tone and visual impairments—to name a few—it is difficult to know with certainty if his seizures are the result of neurological injury. The medical consensus has been that the absence of white matter in Calvin's brain appears to be a developmental blip rather than the result of trauma in utero. I begin to wonder, however, if the scores of lengthy seizures, several upwards of twenty minutes and as long as forty-five, plus an extended four-hour period of seizure activity, has caused further devastation to Calvin's brain and thus contributed to his ongoing seizure disorder.

The other surprising and unsettling finding in this new study is the high SUDEP (Sudden Death from Epilepsy) rate. Ten percent of the individuals in the study group died of SUDEP during the follow-up period, but SUDEP accounted, substantially, for 40%—nearly half—of all deaths combined.

Before Calvin was diagnosed with epilepsy I thought it was a benign disorder for which one simply takes a pill and all is fine. I soon learned that it’s not—not even close. And until we can find a cure I’ll continue to lose sleep over my precious, irreplaceable, little boy, Calvin, and at night I'll always wonder if he’ll wake up the next morning. 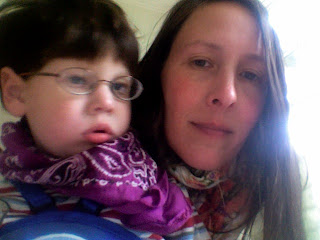 Posted by Christy Shake at 1:12 PM