My boy Calvin will be seven next month, though you’d never know it. He is small for his age and needs great help—often complete assistance—doing things you’d expect from an infant or toddler. However, there are some things Calvin can do, and we are so very proud of these accomplishments which he’s worked so hard for.

Calvin can crawl on his hands and knees, though slowly and awkwardly. While we spot him he can creep up the stairs virtually by himself and can scoot downstairs on his bum. Calvin can stand up in the middle of the floor and walk, but we remain by his side to catch him if he stumbles. Calvin can bend down to pick up a toy and he can finally go from standing to sitting on the floor by himself. His balance is improving so he is able to stand up in one place by himself for longer periods of time.

Calvin can bring a spoon, pre-loaded with food, up to and into his mouth. He can pick up and eat small morsels such as dry roasted peanuts and blueberries. He can drink from a sippy-cup, though he drops it on the ground when he is done. And if we start them first, he can turn the pages of a book.

When dressing, Calvin can pull his shirt down over his head. Once we help him find the armholes he can push his hands through the sleeves. Calvin has just learned how to pull off his loosened shoes, I help him with his orthotics, and then he can pull off his socks. He can put his arms up when we take off his shirt and is beginning to learn, once his arms are out, how to push his shirt off of his head. Just this last week Calvin started stepping into the bath by himself, though his balance is precarious so we always have a hand on him.

Another new skill of Calvin’s is, if a door is ajar, pulling the knob toward himself while stepping back out of the way then walking through the entrance. We are working on grasping doorknobs firmly enough to turn them and we are teaching him to flip the wall light switches on and off.

There are still millions of things that Calvin can’t do but I prefer to focus on my cute can-do kid. 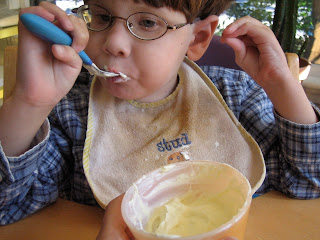 Posted by Christy Shake at 2:36 PM