Yesterday, I sent Calvin off to school in the long yellow bus that stops at the curb in front of our house. This time he got on through the front stairs instead of being carried on the lift seated in his heavy, cumbersome push-chair, a cross between a stroller and a wheelchair. Seeing him sitting in the front of the bus, strapped into a booster seat, I felt a great sense of liberation, both for me and for Calvin, and I gave his friendly bus-driver the thumbs up as she rolled away.

In the past few months Calvin’s muscle tone has greatly improved—allowing him to leave his push-chair behind—though it is unclear as to why. Perhaps the new seizure medicine is lowering the clearance of the other seizure medicine, which is known to cause muscle relaxation. Perhaps, since low muscle tone is a neurological condition, the fact that he is having fewer seizures may be allowing his brain to send his muscles the right messages to contract correctly. Whatever the cause, the kid is most definitely getting stronger, and that feels amazing.

Calvin is doing more things with less help, and while I am so happy and proud to see his progress, sometimes his new found strength scares me. At the same time that I am dreaming of him walking down the sidewalk with me to the playground or crawling into the car seat by himself, I also fear him not knowing his own strength and growing into this big strong boy who will unwittingly wring my neck with his incredibly passionate hugs. But I suppose that wouldn’t be a bad way to go.

Like everything else, though, my husband Michael encourages me to not worry about things that might be looming in the future, until we get there. We just have to take it one day at a time since what we deal with on any given day in the present is more than enough to worry about. Good, sound advice. Now if I could just learn how to take that advice and put it into action I’d be golden. Instead I'm a well worn worry stone. What can I say? 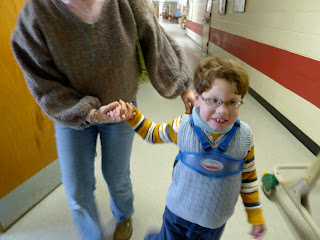