Despair. It’s the familiar, loathsome feeling that knocks me down to the ground with a nauseating punch to the gut every time Calvin has a seizure. What’s worse is when his seizures occur long before expected and in the face of having increased a bittersweet drug that appeared to be holding some promise for possible seizure freedom. That’s what happened this morning.

Calvin had had two pretty awful days in a row complete with all of the harbingers of an impending seizure—manic screaming, crying, general irritability and plenty of head-banging. I had told my mother-in-law that if it hadn’t been only six days since Calvin’s last seizure I’d be certain he was about to have one. Well, he did.

After Calvin’s seizure at two o’clock this morning Michael and I brought him into bed with us. When I finally dozed off, after I had made sure Calvin was asleep, I dreamed. I was at the grocer with Calvin and a new nurse, there to help me cart him around and watch him while I shopped. Rounding the end of an aisle I glanced back at Calvin and saw the horror of his pasty-gray face, his body pitched awkwardly sideways in the cart. His eyes rolled back in his head and he began to seize. The nurse had failed to bring the emergency Valium that I had given her before we left home. The long thin plastic applicator on the vial in my backpack had broken off and was worthless. All I remember thinking, in my panic and fear of an unstoppable seizure was, “what next?”

At that moment Calvin woke me from my nightmare, pushing his trembling feet hard into my side. In the darkness I heard the quiet swallowing sounds characteristic of the repeated partial seizures he used to have, which often lead to status epilepticus—a dangerous and sometimes lethal prolonged seizure, which always landed us in the emergency room and subsequently in the pediatric intensive care unit.

On countless occasions I’ve awoken—alarmed and sweating—from nightmares of Calvin having a seizure only to hear and see him literally having one. Simply put, epilepsy is an infinite nightmare of despair and worry that follows us during our weary waking hours into our deepest sleep, and then, with no uncertainty, greets us, insidiously, each and every dimly lit dawn.

Please share Calvin's story with others and help bring us one step closer to a cure for epilepsy. It's not hard. Just do it one story at a time. 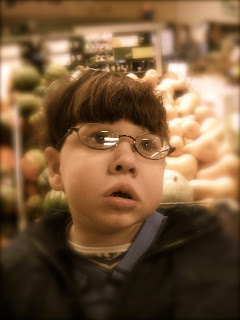 Posted by Christy Shake at 1:09 PM