a part of everything

As a girl I spent hours by myself. On long, hot summer days, after my yard work was finished, I stepped into my navy and white hibiscus print swimsuit and grabbed a large citrus-colored towel edged with orange pompoms. In the freezer were trays of frozen grape Kool-Aid cubes. With a single paper towel folded twice lengthwise I wrapped the bottom of the cube so I could lick it like a Popsicle, staining my tongue and lips dark purple.

Out on the short grass I spread my towel in a spot of full sun between a tangled flowering cherry with a shiny, striped trunk and a few of my favorite gigantic maples, each sporting leaves the size of dinner plates. Being the sun goddess I was, I squeezed aromatic oil from a burnt sienna Hawaiian Tropic bottle and smoothed the thick liquid over my bronze limbs. I lay on my back gazing up at the flawless sky. Often, a pencil thin white line trailing from a tiny speck streamed diagonally across my sky, then widened into a billowy cotton swath eventually dissolving into a sugary haze, scattered into scalloped waves by the wind. Other times I heard only the familiar drone of a small aircraft buzzing low behind the trees.

When Calvin was about two and a half, shortly after he had started having to take drugs for his epilepsy, we used to lie on that same orange, yellow and green flowered towel from my youth. As planes passed by I’d remark about their sound and point into the sky, “there’s an airplane up in the sky, do you hear it?” I wondered if he understood what I was saying; it was clear he couldn’t see them.

I think back fondly of my time alone outside with the world, the oneness I felt with the universe, even at a young age, and I know—and grieve—that Calvin will never appreciate that same independent solitude that I enjoyed as a girl in my own backyard. But still, Calvin and I, like that jet stream, began with a burst of energy—in sharp focus—making a deliberate mark, and as time has gone by we've morphed and changed and become softer, more beautiful, by shifting winds—sometimes harsh—that have shaped and sculpted us until finally we'll dissolve and, most sublimely, become a part of everything. 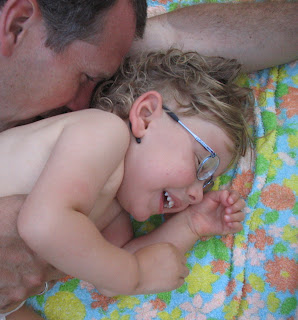 Posted by Christy Shake at 2:01 PM