Friday night, after having had a bit of trouble falling to sleep, Calvin woke up every hour from eleven o’clock on.

Earlier in the day Calvin's nurse and I were discussing his new found strength. She mentioned what a good day he had been having—happy go lucky, walking well and exploring a lot. We agreed he’d been having more and more days like this, but something didn’t sit right with me and I replied, “let’s hope it’s not too good to be true.” Well, it was.

Yesterday morning, Calvin was quiet and pale. I pointed out to Michael how his eyes were at half-mast, kind of vacant and dead as if in a drug stupor. (Who am I kidding? He is in a drug stupor.) Calvin was walking around like the drunken sailor he used to be when he was deep under the spell of three or four seizure medicines and the Ketogenic diet, having trouble negotiating corners and nearly running into door jams. On top of these suspicious signs it had been seventeen days since his last seizure, so he was due.

At nap time, Calvin settled snugly into his crib under his comforter and I put on his lullaby music, softly. I crawled into bed in the adjoining room hoping to get some much-needed shut-eye myself. Just as I was drifting off I heard Calvin’s muffled cry and I raced to his crib. In the throws of a tonic-clonic (grand mal) seizure, rigid and trembling, his expression looked half frightened and half dead, his skin turning dusky without oxygen. I clocked it, and after about two and a half minutes of convulsions it started to pass, his little whimpers accompanying unsuccessful attempts to suck his thumb.

Adrenaline made it easy to lift his forty pounds of limpness from down inside the crib, and I tucked him into bed next to me. I looked at him and, for a split second, I feared the very worst; he was perfectly still, his face drained of color and his eyes stared dead ahead, unmoving, like in all those morbid movie scenes. I frantically shook him calling, “Calvin!” and he roused, his eyes resuming their usual jerky wandering.

As I hugged Calvin close to me, my hand against his soft bare chest as he fell asleep, I felt for his heartbeat and watched the rise and fall of his body with each breath. Then staring up at the crack in the ceiling where the beams meet I saw a tiny wisp of cobweb fluttering pathetically in the slight air current, endlessly and hopelessly tugging for its release. In my heart I felt the same utter futility, wondering if Calvin might ever escape being tethered to a life of endless seizures and drugs. I cried myself to sleep. 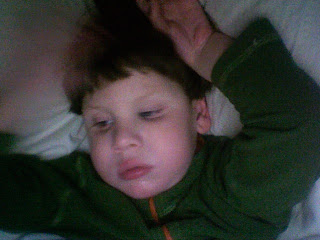