No matter that it was only day seven since the last one. It was hot, easily ninety, and wicked humid. Calvin had woken up sneezing again, his temperature subnormal. The blown glass barometer mounted on the wall gushed blue water from its spout onto the floor. Sunday's full moon had just passed overhead. The fates, it seemed, had conspired against my boy once more.

Trip up, keel over, fall down, poke eyes, go crazy, walk in circles, whine, fuss, refuse water and food; he did all of it and wanted none of it. The nurse I was training told me that she didn't have a good feeling, said she thought he might have a seizure soon, that she just felt it in her gut. "Are you clairvoyant?" I asked, to which she answered, "Sometimes I know who is on the phone before I answer it."

Later, the house was abuzz. Michael cooked soba noodles with lemon, garlic and pine nuts and browned cumin seed for the salmon. We opened up the house to let in the early evening air. Calvin spun in his johnny-jump-up with one finger stuck in his eye while I quickly ran downstairs to finish the laundry I'd had no time to deal with all day. I was in the cool of the basement no longer than two minutes before coming upstairs to find Calvin slung in his jumper, his limp arms and legs jerking in time. Suspended there, he appeared like a marionette dancing on the end of a puppeteer's wand. "He's having a seizure!" I called, and Michael and I raced to release him from his tether.

Gma and Gpa, visiting from Florida, stood quietly and helplessly at our sides as they watched their grandchild seize for six more minutes, perhaps wondering, as we were, if he'd come out of it on his own. I knew they'd not seen a seizure quite like this one—so eerie, so long—perhaps didn't remember having seen one before.

"Shitty," my father-in-law loathed, referencing the seizure, the whole sorry state of affairs that is epilepsy, and I put my arm around him and gave him a hug. And I thought about the hundreds of seizures, the mountains of drugs, the relentless side effects, the pain, the stress, the frustration, the worry, the burden, the loss. I thought about Calvin and his brain and wondered if the fates would ever in our lifetimes cease to conspire against my little, defenseless boy. 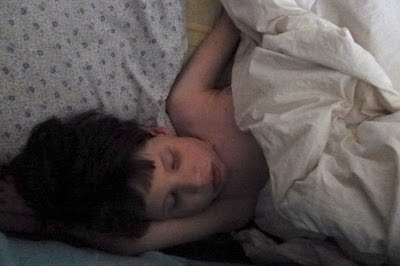