what kind of kid?

What kind of kid would Calvin have been if not for the seizures, the drugs? It seems, from having heard a few recent segments on the radio, that the medical industry is finally fessing up to what I, as the mother of a child with medically refractory epilepsy, have felt in my gut for years: that short uncontrolled seizures perhaps can cause damage to the brain. Duh.

I remember a friend telling me that, back in the early nineties when his infant son started having hundreds of seizures each day, the common theory about seizures was that they didn’t cause brain damage unless they lasted over thirty minutes. He went on to say that, in what he perceived as some swift and arbitrary manner, the medical community suddenly revised that number to ten minutes.

If I had to guess, I’d say that neurologists don’t really know the full effects of seizures for sure. For the most part I feel like I instinctively know as much as they do when it comes to my son’s epilepsy. I live with him. I anticipate, hear, see, feel and grieve his seizures. I see the fear they incite in his eyes and feel it in mine. I witness the nuance from one seizure to the next. I hold my breath each time Calvin has one (they last between four and eight minutes, of recent, and during their initial stage he stops breathing.) I wonder, as I look into his vacant eyes, hold his blue hands, stroke his trembling body, what kind of havoc the seizures are wreaking on his developing brain. Do they rob his skills? Change his personality? Destroy his potential? I have little doubt.

Recently, I asked Calvin’s new neurologist if he backed medical marijuana as a treatment for epilepsy. He told me that he doesn’t prescribe it, so I asked him why. He said that there was no hard and fast evidence or double-blind placebo studies proving its efficacy. He also mentioned how, if his practice prescribed it for adults, there’d be a rash of people coming in for all sorts of (bogus) reasons wanting a prescription for it. I wonder if this conjecture stems from stigma, a rationalization that in turn limits access for millions of needy patients, perhaps because of an unproven fear of abuse by few. And besides, many of the anticonvulsant drugs used to treat childhood epilepsy have never been tested on young children and yet neurologists continue to prescribe them nonetheless. We are left with few options but to give these drugs to our children without fully understanding the short and long term consequences on their health and development.

I feel there’s something inherently wrong with this model. But I’m not sure how to fix it save advocating for the option of medical marijuana to treat childhood epilepsy citing convincing anecdotal evidence until we can get some double-blind placebo studies into motion. That, however, might take years considering the prudish and puritanical bent of some constituencies and the threat that the use of a simple medicinal plant might pose to drug companies.

Until then—and though I love Calvin just the way he is with every cell of my being—I’ll have to watch him age but not change much, watch him grow yet remain a child, watch the years go by, the seizures continue and the drug side effects torment, knowing that with each seizure and each dose of anticonvulsant drug my kid endures puts him farther and farther away from feeling good, from walking and talking and from being the kind of kid he might’ve become. 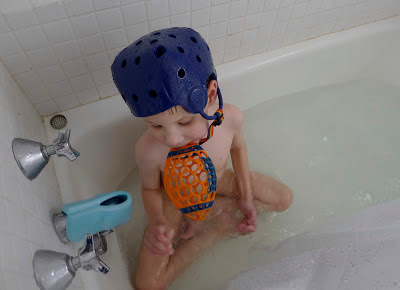