From last June.
My niece Madison was in town for a long weekend visiting from Arizona. We had two days of glorious sunshine and two days of total deluge, which made for a variety of adventures such as kick-boating down the Androscoggin river fishing for smallmouth bass, lunching harborside on fried haddock sandwiches and lobster rolls, watching movies and eating plenty of ice cream.

One night, after Michael put Calvin to bed, we projected Edward Scissorhands on a sheet pinned up in front of the French doors. The film had barely started when my eyes began to sting watching Edward, played by Johnny Depp, living alone in a dark mansion on the hill. The mild boy had been orphaned after the sudden death of his loving father-inventor, played by Vincent Price, who died before he could give his boy hands, before he could make his boy whole. Instead, Edward lives his life with scissor-hands, which he uses to carve shrubs and towering blocks of ice into beautiful sculptures. Regrettably, though, his scissor-hands inadvertently cause harm, sometimes nicking his own face or slicing the flesh of others who Edward is simply trying to help. Like Calvin, Edward is kind and loving, though Edward is not well understood, Edward is disabled and Edward is alone.

The film made me think about Calvin and his various disabilities, about how alone he is with no real friends, no one to truly understand him, including me. I thought about how his disabilities sometimes cause him pain, like when he has seizures or when he falls or bumps into things because of his poor vision and balance. I also thought about how he unintentionally hurts others by pulling hair and butting heads, flailing fists and kicking feet. Perhaps he’s just trying to tell us that something is wrong, but we can’t understand, thus we often don’t know how to help him.

In one of the film’s scenes Edward appears on a daytime talk show in front of an audience of frosted-haired, pastel-clad women. The host takes questions for Edward using a microphone. Upon hearing that Edward is interested in meeting a doctor who can help him with surgery or prosthetics, one woman stands up and says, “But if you had regular hands you'd be like everyone else.” She goes on to say, “Then no one would think you're special.”

The line stabbed me as I thought about poor Calvin who, like Edward, can’t eat with a knife and fork, can’t dress himself, can’t hold hands or embrace a sweetheart, can’t make himself understood. And though Calvin does not have scissor hands, it appears that many people find him difficult to engage with and most don't even try. I'd give anything for Calvin not to be special, not to be disabled.

Because once Calvin steps off of that bus at home, in a way he is alone. Calvin's aloneness is in great part due to his disability, his inability—our inability—to easily engage in activities and functions without disastrous failure, the risk of physical injury or deep psychological bruising. And so, oft times we find ourselves sequestered to our own little refuge—no dark mansion on the hill—just a two-story cedar shingle house with a red roof. And, like Edward, I spend my time out back in the garden where—unlike Calvin’s disabilities—I can control life with something as simple as a pair of shears, sculpting dreams of my own and hoping that somehow, some day, I can make my special son whole before I die. 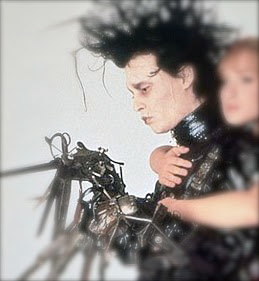