the memory in things

There is a memory of people in things. Some came to me in bits and pieces yesterday morning. Briefly, I mistook Calvin’s chirp for the unmistakable whistle Michael gives me, like a canary to its mate. Then I thought I heard the floor squeak and imagined my father approaching as I embraced Calvin, holding his head in my palm. As seven neared, the morning light streamed in low and westward and I wondered if Dad would’ve been proud of me, wondered if he would’ve understood the burden, heartache and delight of a disabled child like Calvin. I sipped my coffee having never questioned, until now, if Dad liked his black or with milk or sugar.

These glimpses of people reflected in things feels sacred. The embrace of a friend whose fragrance is of lilacs conjures my mother wearing a patchwork smock speckled with flour. The smell of the neighbor's cookout takes me back to hot dogs and doughy biscuits roasting on the ends of sticks, which my dad taught me how to whittle. At night Orion hangs in the sky begging memories of Ronan, the boy who I never met and will never meet, of his mother who perhaps steps lightly between shadows of things that belonged to him, might pad across the same floors that she had with Ronan in her arms, maybe brings the coffee to her lips and thinks of the cup or bottle she’d brought to his lips not so long ago.

Sometimes, when I find one of Calvin's socks floating under the covers in my bed, I sleep with it clutched in my fist, its fluffy whiteness nearly impossible to bear when I think of his hardships. I imagine doing the same every night if he were to leave me. I think of my grandmother when I step into a neighbor’s closet which reeks of mothballs. He gathers up a pile of his dead wife’s sweaters and a garden cap for me to wear. Do wisps of hair trailing across my cheek remind him of her? And as I leave his house I glimpse a vase, standing just so, glowing in the rippled light of old windows and I think of my mother, now a shell of a woman and yet—as if that very vessel—she holds the entire universe within her.

As I sit here writing I look out onto clouds of white and blue forget-me-nots that drift between the rhododendrons and azaleas and iris. I remember when my mother met me in San Francisco and we traveled north to scatter my father’s ashes in a sylvan glen at the base of the Dipsea trail in Muir Woods. I asked her what kind of flowers were dotting the hollows between fallen trees, moss and rotting stumps, and after a moment's pause she said, “I think those are forget-me-nots.” And I understood how beautifully simple things can hold a soul, a memory, a moment, a life. 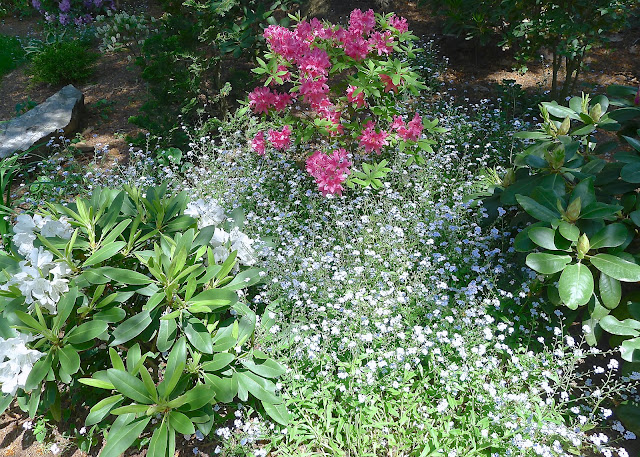