Friday morning I sat and answered another round of questions from the second graders who Calvin spends morning sing-alongs with:

I told them that, yes, Calvin does have a form of autism but that his real struggle is the epilepsy and the medications he must take for it. I said that we don''t know if he will ever get better but that we hope for a cure. I explained that Calvin isn't aware of things like birthdays, then described the dance party we have every year in celebration of his life, for which our adult friends who know Calvin donate hundreds if not thousands of dollars toward finding a cure for epilepsy.

The question that was hardest to answer came from a little girl seated cross-legged in the front. "Do seizures hurt?" she asked. I paused for a second before answering, knowing that some seizures do hurt, that some are terrifying for the victim, that during seizures people burn themselves and bite their tongues and hit their heads and break their teeth and bust their noses. I crafted my answer carefully. "We don't know if Calvin's seizures hurt since he can't tell us ... we don't think so ... but sometimes I think his muscles hurt afterwards," and I left it at that, failing to mention his headaches.

This was the fourth time I’ve spoken to a class about Calvin and epilepsy. The group was focused, patient, serious and listened well to each other's questions. When I explained to the children that most of Calvin’s friends are adults, one pretty girl with dark skin and braids raised her hand enthusiastically and said, “I’ll be his friend!” Somehow I knew she would, and I told her as much.

Little hands kept popping up from the kneeling group of munchkins. Their sweetness and sincerity touched me. This was the first group of students I’ve encountered that didn’t giggle when I told them all about my son.

Calvin sat in Mary’s lap at first, laughing in a way that puts me on edge because I don’t know why he’s doing it. I silently thought, he’s going to have a seizure soon, and so I encouraged Mary to walk him around to help him feel more comfortable. The two of them marched off while I answered the remainder of the kids' questions, wishing so that Calvin could be one of them, his little arm excitedly raised, his lips pursed together in concentration, eager to ask the next question. 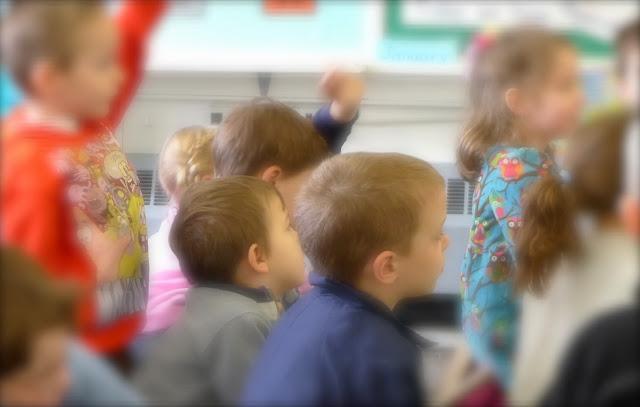