I’ve had this sinking feeling in my gut for years: that things would change, and for the worse.

Three in the morning—again—and I hear him gasp for air. Lights on, I run and detach the netted safety canopy over his bed and toss it aside. My boy’s face is pale, his exposed back cool to the touch. His wide-open eyes do not acknowledge me, nor does he turn to my voice. “He had another seizure,” I call to Michael, who comes quickly and sees what I do: the tongue click and swallow, the feeble attempts at sucking his thumb, the fixed, catatonic nature of his typically pendulous eyes, the sparse whimpers.

Shuddering and shivering, seizure-gas palpably bubbles uncomfortably through Calvin’s gut. Michael gathers him from his bed, our child folding in half like a rag doll full of sand, and carries him into ours. For a time, he writhes and twitches, then finally reaches his arms around my neck pulling my head into his before drifting off to sleep.

I don’t know how long the seizure lasted; they’re nearly silent now. I dread these the most. I fear he’ll have one and never wake up, his face smashed into the pillow, the mattress, the comforter. They’re almost weekly now—the ones I detect. Gone are the thirty-five, forty-seven, even seventy-eight day stints between them. And, though he’s down to two medicines, he’s on super high doses of both, high enough to knock any adult on their ass.

Earlier we’d dined with Luke and Sarah whose son is so like Calvin, save the seizures. I’d given Jacob a bedtime puppet show with his well-loved Monkey and plush blue Pup. In return he’d given me the biggest smile I’d ever seen him sport. I’d glanced at the time to see it was well past seven, relieved to know that Calvin hadn’t had a seizure, even though I’d more than half expected one. Our friends asked about the medical marijuana. I told them that we haven’t yet found a strain high enough in cannabidiol (CBD) and low enough in THC. I went on to mention hemp-seed oil which, from what I've read, is nearly all CBD, though not rich in it. “Why not try that?” Luke asked, and I considered the seizures, the worry, the dread, the pharmaceutical side effects and unknowns and inefficacy and I thought to myself, what’ve we got to lose? Perhaps this sinking feeling in my gut. 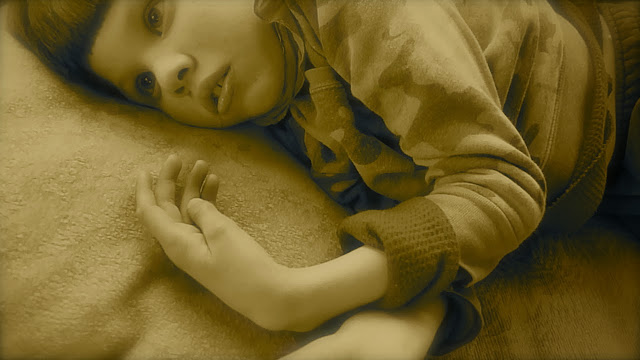