I’ve always been drawn to that which is “other," perhaps because I feel a bit of the misfit myself.

I’ve got a soft spot, an attraction, for the Charlie Brown Christmas tree, the misshapen cookie, the mangled potato chip, the scrawny baby bird that couldn't fly well enough and fell out of its nest, the three-legged shelter dog.

When it comes to my fellow humans I want to know the wallflower, the genius, the underdog, the social deviant, the nerd, the black sheep of the family, the gypsy, the kid with the Coke bottle glasses, the hermit, the brother from another planet, the chick with tattoos and piercings, the immigrant, the guy with the magenta mohawk. Besides being drawn to them, I figure if I can rub elbows with these wonderfully curious, yet in some ways familiar, bodies I can glean something, tease out some new facet of myself that I didn’t know existed, improve on myself or perhaps add a soft layer of humanity that was missing from my heart. Let me intimately know "other" and I am happy.

And maybe, just maybe, I can do the same in return: nurture them, love them, understand them, lift them up, befriend them, embrace them, make them laugh.

So it's no surprise that Michael is my husband. And I suppose in some weird and wonderful way, by some random artistry, it makes sense that Calvin is my son, my little misfit. I don’t mean to say I was chosen to be his mother or that it was some grand design or plan that he became my son—I don't believe that for one second. Just that it works. By some crazy serendipity, it works. 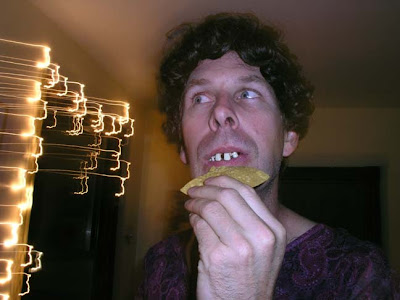 Email ThisBlogThis!Share to TwitterShare to FacebookShare to Pinterest
Labels: humanity, kindness, other, perspective