As if some loony in a Stephen King novel, I raised the spade above my head and slammed it down hard in a fit of rage. Its wooden shaft vibrated in my hands though it didn’t break. Rudy looked at me curiously but without alarm. Across the freshly cut lawn the sun cast long shadows through the trees announcing the clench of autumn and the coming close of day. It had been a glorious one, the kind of day that, because I didn’t fully take advantage of it, stabs me in the gut with regret, worry, want: a spotless sky, a light breeze, an endlessly warm sun. Where did the day go? And my heart sunk into my heels at the thought of time wasted.

Earlier, I’d wanted to reach through the phone and strangle her: the perky woman announcing that I’d qualified for a one-hundred dollar gift certificate. I’d cut her off with a stern voice asking her to take me off of her list, that I had a chronically ill child and that—. The line went dead without as much as a thank you or goodbye. “F**K OFF!” I screamed into the phone, my face hot, my nerves frazzled. It’d been the second robocall of the day and had followed two other automated calls about upcoming doctor’s appointments plus a woman phoning about medical insurance.

On the way to greet Calvin’s bus I stepped in dog shit that, of recent, Rudy scatters all over the yard, deck and driveway in little chunks nearly impossible to see before you’re standing in it. Calvin got off the bus a bit red in the face. Mary said he’d been super hyper all day and hadn’t pooped. All I could do was think, he’s gonna have a seizure. He shrieked for several hours then had a messy blowout in his pants. A shit-covered piece of grape escaped his diaper and landed on the hallway floor. I had to pick it up with my bare hands so Rudy wouldn't try to eat it. Loose stool smeared down Calvin's thigh, and he squirmed and shrieked like mad making it difficult to clean him up. I felt myself spiraling into that dark place that I hate going, powerless against its gravity. My view narrowed to black and at that moment I felt lost and trapped, haggard and weary, tense and bothered, worried and alone and beaten. But worst of all, in that splinter of a moment, I felt loathing for my child. 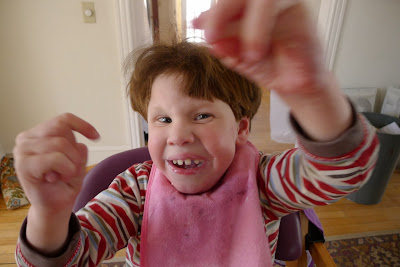 Posted by Christy Shake at 1:59 PM