down and out in the land of milk and honey

Several years back my husband Michael and I faced what could have become pretty scary circumstances. He was going up for tenure as a college professor, which most in the world of academia know can be filled with uncertainty. It was 2008, the year the economy tanked. He’d sent out over a dozen applications for jobs at other colleges and universities in case his tenure was denied, but many of those institutions collapsed their searches due to lack of resources. We knew there was a real possibility that he’d find himself without a job in a time of serious economic uncertainty. We also understood that, if that were to happen, our disabled son’s preexisting conditions could render him uninsurable or, at the very least, burden us with huge premiums and lifetime caps. In addition, the costs of Calvin’s medical care, (his antiepileptic drugs and other prescriptions alone totaling thousands of dollars per month), could easily have ruined us. Thankfully, Michael was awarded tenure and we dodged that bullet.

Recently, I’ve been reading and hearing about the poor people who will be left without affordable health care insurance. Currently, 26 states—all with Republican governors or Republican-controlled legislatures—have thus far declined Medicaid expansion, something not intended in the original drafting of the health care law. But, under a U.S. Supreme Court ruling on the Affordable Care Act (aka Obamacare) in June 2012, the federal government was barred from mandating states to enact Medicaid expansions. As a result, an insurance coverage gap currently exists where millions of people making less than $11,500 per year ($23,500 for a family of four) will have too much income to qualify for Medicaid but not enough to receive federal subsidies when purchasing insurance on a state-run health exchange. This leaves the health care situation of millions of uninsured people unchanged, including a disproportionate 60 percent of the uninsured working poor and 68 percent of uninsured African-Americans and single mothers.

Down and out and uninsured in the land of milk and honey? I wonder if these governors and legislators would be up for trading places with some of their disenfranchised millions, if only for a day. 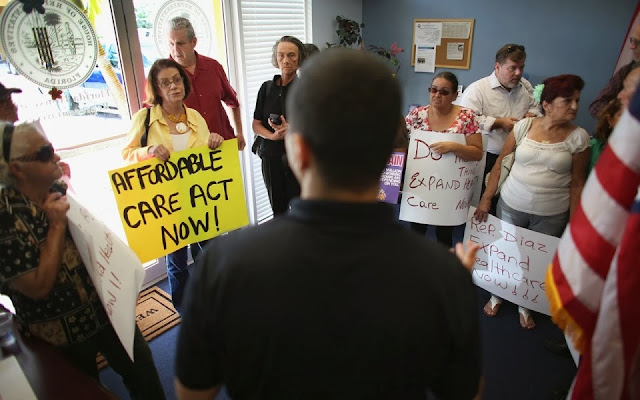