A few days ago Calvin went up the stairs ... all by himself. As I stayed closely behind him in case he fell backwards, he crawled up the first step then stood and grabbed the railing. He stepped up twice to the landing and safely turned the corner ready to head up the flight of eleven stairs to the second floor. Again he crawled up one stair then stood and took two more holding onto the banister. Then he crawled a few more, stepped a couple more then crept the rest of the way to the top. I didn’t lay a hand on him.

We’ve been working on this for months if not years. Words cannot adequately express how incredibly proud I am of his accomplishment. He’s learning new things, faster than ever, and though that isn’t saying much, it still feels good—really, really good. I think it’s because he’s having slightly fewer seizures. I can only begin to imagine what his development might be like if he could get rid of the seizures and stop taking the drugs. I don’t believe in god, at least not in the way the good books tell it, but it'd feel like my own little heaven here on earth if he were free of the seizures and the side effects. 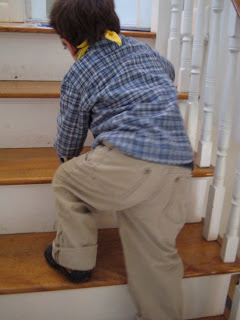