The other night when I was fixing Calvin’s dinner he was completely wacky. If he hadn’t been buckled into his high chair he might have gone flying into the air what with his helicopter arms whirling in circles above his head. The kid was batty, absolutely frigging berserk, and poking the bejeezus out of his eyes. He gets this way more than occasionally now, particularly before a seizure, but this time he was unusually batty.

At dinner he was worse, like a cowboy riding a bucking bronco, that characteristic circular arm motion in the air. I have to loosely secure his other arm with one of his bandannas to do my best to calm him, similar to putting a weighted or compression vest on an autistic child, with whom Calvin has many shared traits. It seems to work, if only a little.

He continued fingering like mad—as bad as I’ve ever seen him—rubbing and snapping his fingertips together with the obsessive-compulsive bent of a raving lunatic. Lately, when he gets like this he’s got what we’ve coined “tight mouth,” his full lips drawn in, almost cinched, into a small circle of tension, his jaw slighted jutted. To be honest, the look on his face, his entire manner, is repulsive to me. I don’t recognize him. It’s like he’s become someone—something—else. What’s more is that I'm not really sure what’s the matter and he can’t tell me, but my hunch is that it's the drugs causing my sweet boy to become a little monster and, if not them, then the seizures or both.

As he was thrashing about his roving hand punched into mine as I reached out to hold it so that I might calm his mad fingering. I heard and felt something pop. He started to laugh, which is why I am pretty sure it hurt—the laughing a recent development, it seems, in response to pain. He laughed himself hysterical, into a frenzy that crecendoed to such a point that I thought he’d go right into a seizure. At one point, after what seemed menacingly like an eternity, I was almost convinced that he wouldn’t stop and I’d end up calling 9-1-1. I’ve never seen him quite so freakish and thus, I became a jittery bundle of nerves.

Eventually his evening dose of drugs beat down whatever chaos was wreaking havoc in his brain. But the night was still young and I waited quietly, on edge, for the dreaded next seizure to pounce. 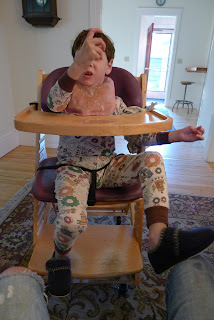