A few weeks ago, while Michael was pruning the part of the burning bush that I can’t reach—not even with a ladder—he noticed a bird’s nest in its tangled outer branches, a cardinal’s nest. The next day while gardening I inconspicuously checked it out. The first time I saw a long feathered tail. Another time she spied me with her beady black eye fixed and motionless on mine, her orange beak gleaming like a safety cone.

We’ve spotted two pairs of cardinals in the yard this year. At dawn on these summer days, between four and four-thirty, we wake to the male cardinals’ clear sliding trill piercing the morning stillness through our wide-open windows. In the evening, when Michael and I eat dinner out in the screen porch we hear the female’s short, sharp chirp before she emerges from the bush and flutters off into the surrounding trees to return later, zooming in making a low arch back into the bush.

On a few of my morning strolls through the dewy garden I’ve seen a fat orange tabby cat lurking at the base of trees. I know it’s out there when I hear the crows work into a frenzy. I hiss it off clapping and wishing I had a slingshot in my back pocket. Its menacing presence has had me worried about the nest.

The other day, after two days of drenching rain, I peeked into the bush only to find the delicate nest capsized, hanging askew and slightly unraveled. I searched the ground beneath it and found a tiny blueish-white egg, no bigger than a grape, adorned with blackish-blue speckles. My brow cinched up into a sorry scowl. As gently as I could I picked up the egg, which was intact, and I held it to my cheek. It was cold. The birds were gone.

Regarding the fragile egg in my cupped palm I thought about my little Calvin. How has he survived—indeed how have we all survived—the nasty curve ball that has been hurled our way sending us into a spin toppling and turning our lives upside-down? Is it about strength? Tenacity? Or is it simply the luck of the draw. Perhaps some combination of all three. In any case I’d like to think we’ve beaten the odds, at least so far.

I already miss those cardinals. I wonder where they’ve gone. I hope they come back next year and have some better luck, beat the odds. But maybe I ought to go out and get me a slingshot. 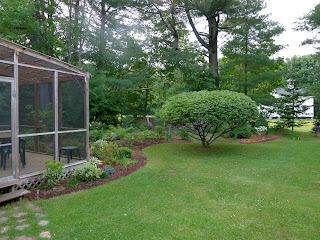