I spent the first few days of my trip to Seattle staying with my oldest friend Katie, her husband Greg and their seven-year-old boy, Cooper, in their cozy home on the outskirts of the city. I flew solo, Calvin being too difficult to take along on such a journey. We spent hours lounging on their large overstuffed couches with coffees or beers in our grasp, just shooting the shit, joking and catching up on recent news. I sat in front of their huge picture window with a view of the street below—not unlike the bay window in my old San Francisco flat—melting into the scene like wallpaper. All tension in my muscles fell from my bones like Greg’s juicy barbecued pulled pork (pronounced “poke”) stewing in the crockpot.

The morning after the reunion, four hours after crawling into bed with a hoarse voice, I awoke to the little peeps of Cooper and his sleepover pal Cody, chattering in the room next door. Suddenly, Eddie Mercury and Queen boomed “We Will Rock You,” a favorite of Cooper’s that he jams to several times each day. All attempts at falling back to sleep were fruitless so I peeled back the sheets, threw on some sweatpants and, rubbing my eyes, padded upstairs to get some strong coffee. My favorite spot was vacant so I propped myself up against the cushions, my legs curled up underneath me, and warmed my hands around a hot mug.

Slowly the house awakened, the boys finished their Mario Brothers game on the Wi then climbed up onto bar stools to eat breakfast. The two blondies each had a bowl of Peanut Butter Puffins that looked like Captain Crunch on steroids. Still groggy, on my way to get some more coffee I reached into the open box and grabbed a few crunchy morsels. The boys asked me for some more. “Sir,” I said to Cody, whose toothless smile and golden-white hair accentuated his sparkly blue eyes, “would you like me to serve you some more Peanut Butter Puffins?” “Yes, please,” he chirped with a grin. “Tell me when,” I continued. Then to Cooper, who was waiting eagerly, “Gentleman, would you like me to serve you some more Peanut Butter Puffins?” “Yup,” he replied, and watched as the golden pillows tumbled out of the box dinging into his bowl, sweet dimples forming in his chubby cheeks. I asked both of them if they wanted any coffee. They politely declined.

Acting the waitress while serving the two boys at the counter was as much my fantasy as theirs. I just wished Calvin had been sitting between them smiling up at me. I'd pour him a bowl and watch as he'd pop the crunchy delights into his mouth one by one. He’d be beaming from ear to ear, begging me to gobble him up, just like a happy yellow bowlful of Peanut Butter Puffins. 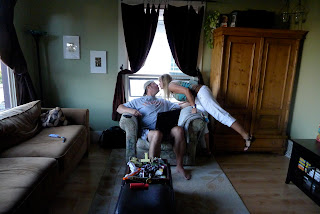