Often, I am reminded of my years coaching swimming to scores of spirited youths when I myself was still just a teenager. I have always liked kids, the way some of them seem wise beyond their years—old souls who I could sit and visit with for hours—while others bring huge grins to my face always acting the class clown, the goof-off, the prankster. Some I coached were very shy and intellectual, warming up to me slowly, while the next one in line was a rowdy tag along just like I had been. Once in a while the same family boasted all of these personalities!

The other day when I was walking Rudy, our old chocolate lab, we passed by the college field house, an impressive building with a high ceiling sheltering an indoor red rubber track. The door on the corner of the structure was open spilling out school-aged kids in neon colored t-shirts, shorts and sneakers. We had happened upon summer day camp. I decided to take a peek.

With my shoulder resting on the door jam, I poked my head inside to see hundreds of scampering rascals, some playing a game that one friendly freckle-faced girl told me was called doctor dodge ball, where the children hurl rubber balls hoping to tag one another out. The scene looked like one of those air-mix lottery machines, colorful balls bouncing and flying each and every direction. It was utter, beautiful, chaos.

On a near corner of the track bold white lane numbers seemed to corral a group of tweenagers who had spread themselves out with pens, pencils and crayons quietly drawing pictures on thick pads of paper, perhaps writing poetry. One of them was sitting with the pad in his lap pensively gazing upwards, eraser tip supporting a happy chin. At the fringe of the gathering lay a tie-dye girl propped up on sharp elbows, her bare legs crossed at the ankles sporting strappy leather sandals, her hair wound up into cute brunette sprays tied with ribbon. She must have been daydreaming.

As I stood at the mouth of the exit another group of littler kids was lining up behind a silver-haired woman to get their hands on vibrant lengths of fuzzy yarn to finger-knit into whatever their hearts desired. Every size, shape and color of kid flocked around me to chat. My heart swelled.

Several children swarmed around Rudy wanting to pet him. One, with my approval, gave him a piece of his banana. Others asked how old he was, what his name was, if he’d bite and if he was a hunter. “He likes to hunt squirrels, and he’ll hunt for your lunch,” I said. A tall teen aged girl with a hunk of metal awkwardly bracing her wide smile excitedly told me of another nice dog she had met recently, one with an orange-brown spot around one eye and a nubby tail. I complimented a skinny little girl’s cool canvas sneakers that were adorned with inky blue peace signs, hearts and stars.

And as I called Rudy to leave a couple of wiry dark-haired young brothers, Edwin and Nathan, sweetly asked me if I had a child at the camp. Holding back tears I said that no, my son was not participating, but that I hoped one day he could. I told the older one that my son had epilepsy and cerebral palsy. "Have you heard of those?" I asked. He nodded soberly. I knew there was some tacit understanding of my sorrowful situation between us, he being a boy wise beyond his years with an old soul, who, in another life, I might have sat with and talked for hours. 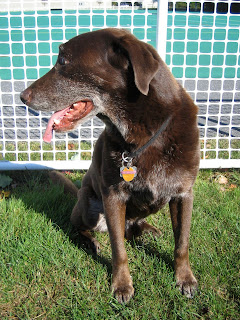