day at the lake

It has been a quiet summer in Maine spent mostly monotonously hanging around the house with Calvin, though we've managed barbecuing, gardening, a walk or two on the beach, a couple of boat outings, a handful of ice cream cones and one rock concert. But the other day our friends invited us up to their lakeside camp north of here about an hour, to enjoy a slightly different pace and scene. When the nurse rolled up on her Harley, we kissed Calvin goodbye, told him that we loved him and set out on our day's journey.

We arrived via the highway, followed a two-lane road turning onto a gravely pot-holed lane that meandered through trees and brush to a dead end. Rudy excitedly jumped out of the car and we all thumped down a pine needle carpeted hillside past a string of small red wooden cottages overlooking the lake. At the water's edge, the main lodge, another modest red cabin that in its history likely served as the mess hall for a boys’ summer camp, we were greeted by our lovely hosts and a veritable litter of black labs.

After meeting the large extended family I visited the camp cook who was back in the kitchen working her magic. With her hair bundled up and an apron tied around her waist she rolled clumps of shortbread cookie dough into crushed almonds and pine nuts, placing each ball carefully on a baking sheet then flattening them with the back of a spoon. She had just finished making a pot of saffron-colored chicken and rice soup that smelled deliciously of sauteed onions and butter. I found it hard to pry myself away from such intoxicating aromas.

Our first order of business, though, was taking a walk out to a point where we waded briefly in clear water and threw a stick or two for the dogs. From there we followed a narrow rambling path through a thicket of blueberry shrubs leading to a lagoon encrusted with lily pads. The two of us, plus Michael’s childhood friend, his wife, two daughters, mother-in-law and three labs, ate clusters of small blackish berries as we strolled lazily in line chattering and snacking as we went. I felt just like some character in a child's picture book.

Back at the camp, the fresh berries having whet our appetites, we slurped spoonfuls of warm golden soup and helped ourselves to a buffet of breads, meats, cheeses, spreads and salad. A wide covered porch invited us to gather and linger around a small table in stiff wooden chairs drinking sticky sweet lemonade out of flimsy turquoise colored paper cups. The lake, only a few yards from our feet, reflected a cloud-strewn sky in its mesmerizing deep lapis face. Gazing off at the idyllic scene my thoughts drifted to a girl who last summer, at a lake not far from our home, had drown in shallow water while having a seizure. I imagined her family gatherings this summer—and infinite seasons to follow—that would never again be the same.

Before we knew it we had to pack up and turn right around. Still wearing my wet bikini after a couple of fatiguing water ski runs, relaxed and tired, we were escorted uphill by Michael's friend and his youngest, just eleven. Earlier, when bringing the boat in, the girl had asked about Calvin, wanted to know how his seizures were, how many he was having compared to before and if they were bad. I explained that he was having about the same number of bad ones but fewer of the others. "He's walking better but still can't talk," I added. "Will he ever talk?" she asked. I told her we didn't know, but as long as he continued having seizures and having to take drugs for them he likely wouldn't. She made a little whimper-like sound then was silent. Walking to the car she said sweetly "I wish I could see him again," and remarked about how the last time she did "he only came up to here," touching her graceful hand lightly to her hip.

On the drive home, after many long hugs goodbye, I imagined I was still at the lake. I'd be walking arm in arm with the girls, wading in the water, brushing the tangles out of their wavy blond hair talking of random things—of life—while watching the big sky slowly darken to black, chalk full of glimmering stars and counting the fallen ones whose tails trail off then disappear into nothing. Perhaps we'd make s'mores cuddled around a fire sitting on stumps with the chill at our backs—all things I yearn to do with my own son, but can't, I thought.

Michael tapped the brakes and I snapped back into reality. Remarkable kids, I thought. So sweet and so kind. "They're such nice girls," I turned to Michael whose hand had reached out to squeeze mine, "such a nice family. I'm so glad we got to come up." 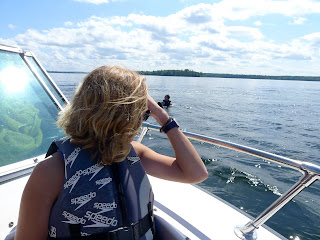