I slept most of the way home on the red-eye, my hood pulled over my eyes. It felt more like a month of Sunday’s since I’d been home instead of less than six days. I was missing my boys ... a lot.

The plane pulled up to the gate while I brushed my hair, tied it back and popped a stick of fruit flavored gum into my fuzzy mouth. With luggage in hand I rolled it up the ramp, down the escalator and out the automatic doors. Across the street in a small parking lot waited Michael and Calvin walking around the car, Calvin banging and mouthing it in his usual style. I whistled like we do when we are looking for each other in the grocery store. Michael looked up and met me with a kiss, then I bent down to give Calvin smooches which seemed to make him laugh, though perhaps he was laughing at something else that was either present or just in his mind.

I loaded Calvin into the car regarding his poor complexion. On the ride home he frantically kicked the driver’s seat, fingered incessantly and stuck his hands on his ears umpteen times while his eyes rolled like marbles in his head. He bit his shoe and leaned over to yank my hair, but he never really looked at me, lost in his own little autistic, retarded, epileptic, medicated world.

The reunion weekend had been spent with friends and their kids and their friends’ kids. The juxtaposition between their walking, talking, looking, asking, answering, running, playing, imagining kids and Calvin couldn’t have been more stark—my child appearing more to me now like a psycho than anything, the recent increase in his seizure medicine seeming to exaggerate his idiosyncrasies.

Michael and I drove home mostly in silence as I sat next to Calvin trying to prevent him from poking his eyes. The weekend's happy echoes and warm hugs of my classmates, friends and family trailed far off in the distance behind me. 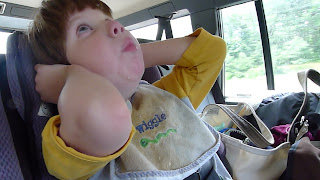