The milkweed has turned to seed, its fuzzy beak-shaped pods, bearded with downy tufts, dot the roadside. When the weather starts getting colder and the autumn leaves shed, exposing naked branches, I know it’s time to start getting creative with Calvin. In a few months, when snow is on the ground, it will be too cold—not to mention impossible—for him to walk around outside. Inside there isn’t a lot to entertain us, particularly considering he's not much interested in playing with toys.

Sunday was beautiful, though only in the mid fifties as a brisk fall wind cut through my cottony layers. I bundled Calvin up and loaded him and Rudy into the car. We drove a few miles out to visit my friend Lucretia. In places, the rocky road that leads to Milkweed Farm is like a dry riverbed, gouged and rutted by hard rains. The bouncy ride sometimes makes Calvin laugh.

We drive right up to the house and I help Calvin roll clumsily out of the car seat as much on his own as he can. Rudy heads out to explore the farm which smells warmly of hay and manure, an aroma I remember fondly from horses that boarded on either side of my childhood home. Calvin wants to pat and bite the car forever, so I pry him loose hoping he won’t collapse in the mud in stubborn refusal. Smiling, Lucretia greets me with an embrace, her body warm and strong under a woolly knit sweater vest hugging a floral blouse. She’s got her jeans bunched up above a pair of thick, black, muddied rubber boots that look a size or two too big, though practical enough. With her curly dark, slightly graying hair loosely twisted and tied back, the farmhouse as her backdrop, she seems from a different era, reminds me of a Walker Evans or Dorothea Lang portrait, but lovelier.

As we enter the house she kicks off her boots and helps me with Calvin, holding his other hand as he steps over the threshold onto a slate floor. It’s quiet inside, her four young children and husband gone out for the day. The air is warm and inviting, smelling of the sweet applesauce stewing on the stovetop. Calvin can’t sit still so, as we visit, I take him up and down the stairs and I wonder if he realizes he’s not at home. The banister, which is on the opposite side of the stairs than ours, confuses him and, as I help him go down, he lifts a leg high into the air as if stepping up. “We’re going down the stairs, Calvin,” I gently remind him.

It quickly becomes clear that it’ll be impossible to sit and have a cup of tea with Calvin in tow since he can’t sit by himself on a chair and probably wouldn’t if he could. “I have an idea,” I offered brightly, “why don’t we take our tea out to the car, buckle Calvin in so we can sit and relax for a while?” And we did.

While Calvin drank water from his sippy cup, happily sucked his thumb and poked his eyes—though we tried in vain to stop him—Lucretia and I sat facing each other, each with a knee propped up on our seats. I watched several laying hens skitter outside her door upside down in the reflection of the sunroof. Pigs squirmed, galloped and bucked, the dog barked and Sam, the handsome young farmhand, ran his wheelbarrow barefoot through the turf. As we sipped from heavy mugs of sweetened rooibos tea the cloudy sky darkened as a narrow angle of sun lit a stand of golden maples and oaks. It was a perfect late afternoon outing, as cozy as if we were seated in some cafe nook, surrounded by autumn’s beauty.

When our cups were empty and it was time to go she sent me home with a dozen fresh eggs, still warmish and damp in the carton from having just been washed. She tossed in a pair of coffee colored brass-studded cowboy boots that she never wears, knowing that I’d like them. We hugged and said so long.

I think we’re going to have to make a habit of this as the daylight shifts, the days shorten and the milkweed inevitably gets blanketed in snow. 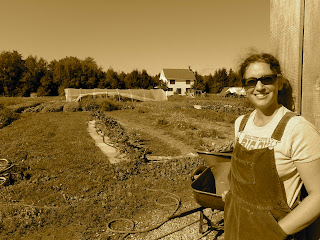