“Hi, hon,” my mother says warmly and excitedly when she hears my voice on the phone. That’s how I know she still knows who I am—the Alzheimer’s not having completely eaten her brain to cheesecloth quite yet. We talk on the phone for ten or fifteen minutes, the conversation circling round and round like a carousel. She asks me things like how old Calvin is—though doesn't remember his name—or how much he weighs, at least three times in the course of a short call. She always pipes, “So, what’s new with you?” This time I tell her that it’s a lazy day and that Michael is cooking a pork roast that accidentally thawed when our freezer got unplugged. “I’ll be right over,” she quips—her standard reply any time I mention good cooking. I ask her what she's up to and she says, “I don't know quite what I'm doin', but I'm doin' it.”

Mom often tells me, in an earnest tone, how much she admires me for the job I’m doing raising Calvin, even though most of the time she’s forgotten he’s got epilepsy or what seizures are. “No one can ever know how hard it is ... only you can,” she adds. I thank her for her loving concern and tell her that I learned to be a good mom from her, and add, “yep, he’s kind of still a baby, Mom—a big baby,” She replies in a soft, motherly voice, “yes, but he’s your baby.”

I get a twinge of sadness wanting to hold her while knowing our love spans a three thousand mile divide. But I’m thankful for the frequent conversations we have, that she’s still as effervescent as ever. We talk about things including the weather and, since the exchange is sometimes difficult—because of her gradual loss of simple words and the ability to describe things—I tell her what I’m up to and try to engage her that way. This time I ask her what she might dress up as for Halloween. She tells me she’d be a witch. “Then you won’t have to dress up too much,” I joke. She laughs and tells me “they won’t let me have any candy anyway, at least I don’t think so.”

We end our chats with dreams of seeing each other again. I mention how I’ll try to get out to California and she responds saying that maybe she can fly out here for a visit. I wish she could see Calvin again, it's been so many long years, but neither could make the trip very easily. I know she still understands that I live far away, which is something of merit because often she doesn’t remember that she lives with my brother and his wife, can’t place Matt’s face. I joke in the usual Shake style, “he’s pretty ugly anyway, so you might not want to remember.” We have a good chuckle. Before hanging up the phone, we offer repeated I love yous that buzz and loop around each other like bees and birds. We can’t seem to say it enough. I put down the phone hearing her fumble with the one in her hands, wondering how to hang it up, and think, I’m her baby ... I’m still her precious baby. And sweet thoughts of her linger in my mind for the remainder of my lazy day. 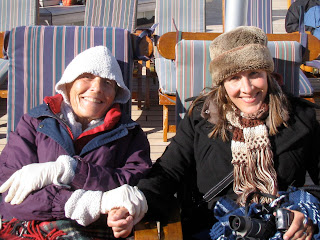