Whenever the phone rings while Calvin is at school my heart jumps then beats a little faster. Today it did for good reason. Calvin had a seizure while eating lunch at school.

On the other end of the phone the nurse reported that Calvin seemed to be coming out of the seizure, that it had been two minutes, that his color was coming back into his face and that he was trying to suck his thumb. I knew by her description she was right. He’d been eating grapes at lunch in his adaptive chair, its large, heavy wooden tray locked on both sides with those old-fashioned bar latches you see on rustic bathroom doors. It was difficult and cumbersome to get off and Mary, his one-on-one, feared he might choke on a grape. But she managed to free it and held him in her lap as he seized.

I breathed shallow and short into the phone. I told them to put him on the bus right away, figured it’d be safer to have a dedicated driver plus someone to hold him instead of me glaring into the rear-view window trying to watch him and drive at the same time. Within minutes Cindie, his heroic bus driver, pulled up to the curb in front of our house just as rain began to sprinkle out of the dark sky.

Mary had held him in her lap for the short ride, then stood in the aisle and transferred him to my arms. She followed me down the steps and across the yard carrying his lunch box and satchel while raindrops splattered onto Calvin’s glasses and cheeks and a line of cars formed behind the bus. “Can you get Rudy in here?” I shouted over my shoulder as I carried Calvin up the stairs. I heard Mary pleading with stubborn old Rudy, then Cindie’s voice calling him, no doubt brandishing a dog treat in her hand. She keeps a stash of them, tosses one to Rudy every time she opens the bus door. “Thanks guys” I yelled from the top of the stairs as I went to lay Calvin in bed. “Love you,” called Cindie in a sorrowful voice. I could imagine her sad face as she said it. “Love you too,” I replied.

Calvin fell asleep within minutes, something he always does after these nasty grand mal seizures. He’s sleeping right now here beside me. I saw it coming again, said to Michael last night, “he’s winding up, and it’s only day five.” So today it's day six, the time between seizures moving in on us like the walls of a torture chamber or giant compactor, while we try in vain to push them out with all the muster we’ve got.

When it comes to Calvin’s treatment choices, I usually take the helm of a ship whose crew includes Michael, Calvin’s neurologist, her nurse and dietitian and Calvin’s pediatrician. I do plenty of research on the drugs, their efficacy and their side effects and end up—most of the time—with a gut feeling for which path to take. This time I feel like I have no clue. The options—none of them very good in my opinion—are to increase one of the two anti-convulsant drugs he takes, the one related to Valium. And though he’s got room to go up, it seems pretty clear that Calvin habituates to it, which is why, after time, his number of seizures sneaks back up. The second option is to try a new drug, but its main side effect is dizziness. Don’t get me wrong, all the seizure meds cause dizziness, but this one shows a markedly worse problem as compared to the placebo or other meds. Calvin already walks like a drunken sailor, so increased dizziness is one of the last things I want him to suffer—though isn’t it sick he should suffer at all? Doesn’t he already suffer enough? The last option on the table is to re-try a drug he tried when he was just two, the thinking being that perhaps, since his brain is different now, and since the seizures are different, and since the parameters for how much a patient can take are broader now, that perhaps it could work this time. That drug, however, can cause behavioral issues like the two he already takes. Insert F-bomb here.

But I can’t seem to get through to the crew. Been trying for over a week. So I’d better get back to my research and see if I can figure it out on my own, or at least see what my gut thinks.

Until then, little Calvin, sleep baby, sleep. This one is over ... for now. 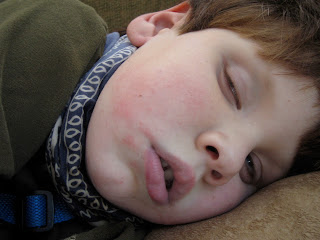 Posted by Christy Shake at 1:56 PM