Today is day fifteen since Calvin’s last observed seizure. I say “observed” because we never really know if some of his vacant stares, manic laughter or shoulder shrugs are seizures. It’s the longest period between seizures since early April. The next record to break, if he makes it past today, is seventeen days, which happened three different times back in the first few months of this year. At that point Calvin hadn’t gone seventeen days between seizures in almost two years.

Keppra, which we just added to the other two antiepileptic drugs in his regimen, is one he’s tried before, five years ago when he was just two and a half. It worked to extend the period of time between seizures, once as much as six weeks, but he still had episodes of status epilepticus, suffering as many as ten or twelve in a day that would roll into a prolonged tonic-clonic (grand mal) seizure lasting twenty minutes or longer. On one occasion we thought we might lose him during a forty-five minute seizure.

Epilepsy, seizures and drug treatments were new to us back then. When the Keppra, at a relatively high dose, wasn’t stopping the clusters of seizures that continued to occur, his former neurologist pulled him off in favor of an older drug known for its efficacy but also for causing bad side effects. It hadn’t occurred to me at the time to ask if adding a second drug to his Keppra protocol—one good for stopping clusters, such as a benzodiazepine—might work. Makes me wonder now, woefully, if perhaps we might have spared Calvin five years of hundreds of miserable seizures, debilitating drug side effects and scores of missed milestones and lost skills.

Instead, we moved Calvin from a drug that had no obvious bad side effects, at least none that I remember, to a drug, Depakote, that turned out to be less effective, created a zombie-child, robbed him of many of his newfound skills and began damaging his liver. The gradual increase in seizures he experienced on Depakote did not abate for years after coming off of it, even when taking three antiepileptic drugs at one time plus rigorous dietary measures.

So, although Calvin is “enjoying” apparent seizure freedom these past fifteen days, he’s been a raving lunatic at times, laughing so hard he collapses, flailing so spastically at mealtimes he can’t manage to try using a spoon, (which he’s still a novice at, though we’ve been practicing for over five years,) whipping his head back and forth so wildly that his neck cracks, (though perhaps that is his goal,) and crying at times for reasons we cannot begin to understand (Calvin almost never cries anymore.) At best, drug treatments are an abysmal trade-off for seizures—a band-aid, not a cure.

Please share Calvin’s Story with others. Help bring us one step closer to a much-needed cure for epilepsy. We do the hard work—you just push a button. 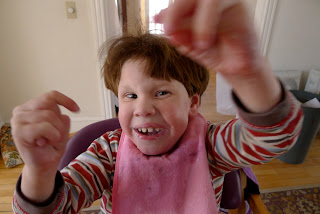 Posted by Christy Shake at 2:06 PM