When I went up to kiss Calvin goodnight on Sunday, after his third dose of a third antiepileptic drug that I buried—along with his others—into his yogurt at dinner, (one and a half of a round white pill, three salmon-colored oval pills and one half of this new baby-blue colored oval pill,) he didn’t smile. He almost always smiles, but not this time.

I gently lifted his head to give him a bottle of water, then stroked his face and told him I loved him. Since starting the new drug he’s been sleeping restlessly, and I’ve found him uncovered in the middle of the night, knees tucked up underneath his belly rubbing his head in his hands. Sometimes he whimpers.

It almost makes me ill—carves a nervous hollow pit into my stomach—to think about how these powerful drugs must make him feel. I wonder if he wonders why he feels so odd, so bad, so euphoric, so irritable, so dizzy, so weak, so headachey, so uncoordinated, so tired, so wired—so not himself. But then, what exactly is himself? I ask. Calvin has been on nine different courses of antiepileptic medications, sometimes as many as four at a time, since he was only two years old.

I worry these drugs are stealing away my Calvin, slowly turning him into a psycho right under my nose, but at such a rate it’s impossible to tell if it’s the drugs changing him or just the natural development of his personality. I can’t know. I’ll never know. Who might my son have been if not for these frigging seizures and mountains of chemical drugs? It’s just no life for a child, is it? Can you imagine if it was yours?

Please share Calvin’s Story with others. The only hope for a cure is to raise epilepsy awareness to an appropriate level that highlights its prevalence, its magnitude, its suffering and its costs. It’s as easy as pushing a button. You can do it, I know you can. 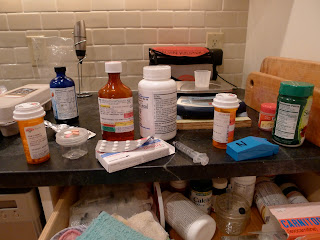