I never heard another word from Calvin's mouth after he once said mama when he was eighteen months old—before his first seizure.
Calvin never made a wish then blew out a birthday candle.
He never jumped onto our bed to crawl in with us at daybreak.
I never went to sleep not worrying that I wouldn't wake up to the seizure that would take his life.
I never had a crayon flower drawn for me with the words I love you scrawled in the clouds.
Calvin never had a friend come over to play, and a friend never invited him over.
I never watched Calvin somersault and cartwheel, pick wild blueberries, walk along a wooded path, build a sand castle, or break a paper-mache piñata.
Calvin never told me his favorite color.
He never had a month without seizures in over four years.
Calvin never got money from the tooth fairy—proabaly didn't even know his teeth fell out.
He never drank out of a cup and set it back down on the table.
I never took Calvin trick-or-treating, he never held a bag full of candy—or any bag—in his hands.
Calvin never ate a piece of pizza, never took a big bite off the end of the floppy, cheesy, saucy triangle—doesn't know what a triangle is.
I've never given Calvin less than six different drugs multiple times each day since he was three.
He never put a round peg in a hole, stacked blocks, worked a puzzle, folded a paper airplane, pointed his finger at an object, or fed his dog a bone.
Calvin never asked me why the sky is blue.
I never told him.
I'm sure I never will. 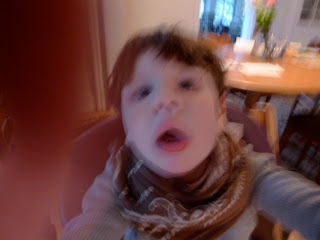