A few years ago my sister gave me a beautiful strand of cloth birds she’d brought back from Asia. The dozen or so resemble hummingbirds and are hand sewn, cut from colorful felt. Tufts of yarn serve as wings and tails—beads for eyes—and each is wrapped in a metallic gold ribbon harness. The cord itself is adorned with various beads and shells and a tiny brass bell tied at the bottom tinkles happily when disturbed. The string hangs from a tack beside Calvin’s bed just to the right of the light switch. When I turn the light on I sometimes jingle the bell—inadvertently or not—and it makes me smile.

When she gave it to me I pondered its symbolic meaning. At first I imagined it like a calendar, similar to the bird-themed oblong felt ones that my deaf, autistic uncle embellished with sequins then sent to us every Christmas when I was a kid. And then I thought of the book Bird by Bird, by Anne Lamott, that I’d read several years ago and from which this passage comes:


Thirty years ago my older brother, who was ten years old at the time, was trying to get a report on birds written that he'd had three months to write. It was due the next day. We were out at our family cabin in Bolinas, and he was at the kitchen table close to tears, surrounded by binder paper and pencils and unopened books on birds, immobilized by the hugeness of the task ahead. Then my father sat down beside him, put his arm around my brother's shoulder, and said, "Bird by bird, buddy. Just take it bird by bird."

We have to think of our life with Calvin in much the same way, taking each day, each challenge, each disappointment, each monotonous, worrisome, fearful minute one by one. To do it any differently would be too great a task, too daunting.

Sometimes I look back at past calendars. In any given month a dozen or more days are blocked with fading orange highlighter—like a quilt—noting Calvin’s seizures, marked with large black dots flagging tonic-clonic ones or strings of heavy “Os” for partial complex ones. Following are smeared inky descriptions of each; how long, how violent, if he stopped breathing, if we had to give him the emergency rectal Valium, if we called 911, if we went to the ER, if he was transported to the pediatric intensive care unit in Portland. Each month is stained with bright green or yellow swathes and scarred in sharp black letters tagging changes in Calvin’s multiple medications, doctor’s appointments, blood draws, illnesses, therapies and nurses’ visits.

And when the enormity of our situation becomes too much to bear—when I don’t know if I can change another dirty diaper, hear another manic scream, struggle to give another medicine, agonize over another seizure, endure another sleepless night—I run my hands down that colorful strand of plump cottony birds and think to myself, bird by bird, Christy, bird by bird. 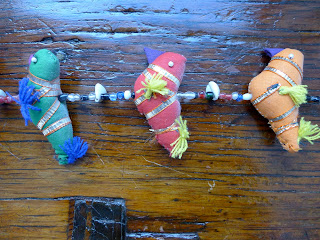