i hope we make it through the night

Last night I heard a sound that I hadn’t heard in a while—the most blood-curdling sound I think I’ve ever known. It reminds me of a grieving woman wailing over her dead child or the horrifying, groaning shriek of someone being tortured. But it’s neither of those. It’s the sound my little boy makes near the start of a seizure ... when it transitions from a subtle partial seizure into a full-blown sinister grand mal.

He’d been in the bath again. I’d just come in from shoveling the driveway after a long day of snow and had built a fire in the wood stove. I’d started preparing Calvin’s evening medications—three of the four of which are seizure meds—while Calvin was upstairs squealing and laughing in the tub. He’d been unusually crazy the past several days and in my journal I’d written things like:

Suddenly, an eerie silence fell over the room like a veil and I thought, oh boy, here it comes, and sure enough, his nurse Stacey called my name and as I ran up the stairs I heard Calvin’s agonizing scream, like some dog that'd been hit by a car.

Dripping wet, Calvin lay on the corner of the bed with a towel draped over his thin body. His face was turning as blue as I’d ever seen it, sickeningly reminiscent of Violet Beauregarde in Willy Wonka and the Chocolate Factory. He lay completely still, his fingers blue up to his knuckles as if dipped in paint. “Come on, sweetie,” I pleaded, and kissed him on the neck, “come on, baby, you can do it.” The nurse and I both took turns whacking Calvin’s wrists together—something a friend had shown me that his mother used in Waldorf institutions to stop seizures and something that had appeared to help in the recent past. Shortly thereafter Calvin took a deep breath and sighed and by two and a half minutes his color began to return.

While Stacey stayed with him and got him into his pajamas I fled downstairs for his medicine and some applesauce. As a team, we managed to spoon in his seizure drugs before he fell into a deep sleep. She picked him up like a sac of potatoes and gently laid him into his bed and pulled up the covers. We lifted and locked the safety panel, secured the netting and switched off the light closing the door behind us. We hugged each other on her way out.

Later, with the hissing baby monitor slung around my head, Michael and I watched the film Contagion. I was shocked to see actors—playing victims of an evil virus—writhing, foaming at the mouth, stiffening and convulsing in the vicious throws of grand mal seizures. I remembered reading that epilepsy used to be thought of as contagious and those afflicted were feared, shamed, placed into institutions and asylums, cast away from society. More so, it intrigued me to hear one of the film's characters ask how the victims had died. “Seizures ... coma,” someone said. Finally, I thought, maybe the world will begin to realize that people can die from seizures.

I looked in on Calvin on my way to bed, twisted the top of the tiny flashlight I use every night that's kept on his dresser, and shined it onto his dear face. His eyelids were smooth—closed—his fingers and ears appeared bright pink. He looks so peaceful when he sleeps, I thought. And as I curled up in bed I peered outside to the glowing winter night thatched with blackened trees clownishly iced in marshmallow fluff like in some Dr. Seuss book and thought—as I have countless times before—I hope we make it through the night.

Please continue to share Calvin’s Story with others. Help bring us one step closer to a cure for epilepsy. It’s not hard. Just do it one story at a time. 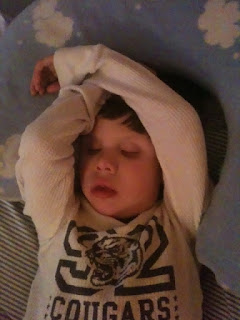