Though I’ve lived in Maine over ten years, I still find it hard to believe that my home is in a place where snow is guaranteed every winter—lots of it.

Growing up in a suburb of Seattle, where the weather was mild, I delighted in waking to the rare winter storms that coated everything in white. On these special mornings I’d peel myself out of bed early, grab my long underwear, wool socks, flannel shirt, sweater and jeans, haul the lump to the living room and plop myself over the heater at the base of a large window and get dressed. Dim blue light filled the darkish room. Outside, large flakes dropped like bombs, smaller ones dancing around them, as I hopped over the warm forced air, which blew my hair around something like Marilyn Monroe’s skirt.

Boots, coat, hat, scarf, mittens—I’d  eagerly scamper outside with my brothers and sister. Some threw snowballs, others strapped thin wooden ski’s to their feet and slid down the shallow hill to jump off the short wall that flanked the hand-poured cement basketball court my dad had filled with water for a makeshift hockey rink. Off on my own I made snow angels and dissolved flakes on my tongue.

Once, my brother Matt and I rolled an enormous snowball around the yard until it was bigger than both of us. We shoved it off the edge of that wall and plunked it onto the rink. For the next hour or so we worked on carving a hole out of its center large enough for us to crawl into. Inside, Matt fashioned a little, packed snow-bench for us to sit on plus an icy placard that read KEEP OUT that he fastened just above the entrance. It was cool: our own little homemade igloo. I’d curl up inside and watch my brothers whack shabby hockey sticks at a scarred black puck, carve shavings off of the ice with their skates’ rusted steel blades.

Sometimes we’d build a sorry kind of misshapen snowman employing the usual crooked sticks for arms, dark rocks or bark for eyes with a gravel smile. He’d always be a simple, paired-down kind of guy that sat contentedly as the six of us and our friends frolicked around him pummeling each other with snowballs, stuffing snow down the backs of each others’ coats and rubbing it red into defenseless faces. Then we’d hear mom ringing the patio bell for breakfast. Back inside it smelled of broiled sausage, maple and cinnamon. The windows all frosted up as we’d pile sourdough pancakes onto our plates, slather them in butter and drown them in syrup before demolishing them and heading back outside again.

As I sit here writing this, two days after a good snow, I look out at the garden. The rhododendron leaves are all shrunken and drawn up in the sub-freezing temperature. Snow-laden branches sway in the chilly breeze. The yard is covered in white with only a trace of Michael’s foot prints—Rudy’s alongside—marring its surface. There are no snow angels, no igloos, no evidence of a snowball fight, no smiling snowman, no friends happily trudging powdery paths through the pristine blanket. There will be none.

Calvin got a pair of snow boots from his grandparents for Christmas. We beat the first challenge of getting them onto his floppy feet. But then he tried walking in them and couldn’t. The boots are either too heavy, too cumbersome, or both and—even indoors—he dangled from my arms like a pitiful forty-pound marionette.

And so, just like the past seven winters, we’ll spend it mostly indoors, though the crystalline sky with its warming sun might just beg us out for a stroller ride. And if it’s too cold for that we’ll simply snuggle and hug and kiss and “dance” to music, and I’ll pass the day dreaming fondly of my own winter days as a child. 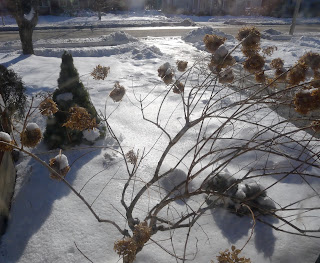 Posted by Christy Shake at 1:48 PM