man on the moon

It was as though the sky
had silently kissed the earth,
so that it now had to dream of sky
in shimmers of flowers.

The air went through the fields,
the corn-ears leaned heavy down
the woods swished softly—
so clear with stars was the night

And my soul stretched
its wings out wide,
flew through the silent lands
as though it were flying home.

—Night Of The Moon, by Joseph Freiherr Von Eichendorff

Awake in the middle of last night the full moon appeared as four, each disk diminishing slightly in size and brightness, quadrupled in the storm window’s glaze like a row of silvery coins. Looking up, my breath fogged the glass, but I could still make out the shadowy areas on the moon's seemingly flat plate surface. There’s the man on the moon, I thought. A few weeks before I’d seen a partial moon with two brilliant stars and thought to myself, Mama moon and baby stars. But truly, the full moon has always reminded me of Calvin, or rather, he of it.

The first time I saw Calvin was from the opposite side of a thick clear plastic box—an isolette. His head was round with downy fuzz, his ears—lacking cartilage—laid flat against his head. He had no eyelashes and his glowing skin was marked, wrinkled and red where tape had been peeled off having earlier secured the tube that went down his throat to help him breath. His tiny bird arm was splinted and bound where the IV needle had been threaded. With eyes closed, he appeared so peaceful if not for little worry lines already formed on his brow. “He looks like the man on the moon,” I said to Michael, and began to cry.

“Hi Calvin,” I said to the wee figure, smaller than a sack of sugar, who was stuck with leads and monitors and wearing only a diaper—so exposed, so vulnerable. At the sound of my voice Calvin opened his eyes for the first time, and I felt my heart free-fall, like a shooting star across a moonlit sky. 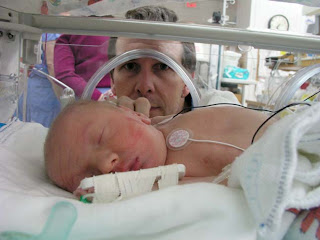