On weekends, when Michael, Calvin and I go to the coffee shop to leisurely sip our lattes, we prefer not to tie Calvin up to the tree outside right next to the slimy bowl of water. We'd rather have him snuggle inside with us. And although it would be damn convenient, I don’t leave Calvin at home all day by himself, and while shopping for groceries, I opt not to leave him in the car, even if the windows are rolled down. Sometimes I dream about how easy it would be just to scoop out some kibbles and throw Calvin a bone, but you'll never find me succumb to that. And although it might be advantageous—particularly on a tight schedule—to scrub Calvin down every few months, we give him a warm bath each night especially since his hair doesn’t clog the drain.

Rudy the dog, on the other hand, doesn’t seem to mind avoiding the bath, and is very good at telling me when he has to pee or poop. When we let Rudy outside to do his business we don’t bother bundling him up in a down coat, scarf, hat, mittens, wool socks and snow boots, because that’s a major pain in the neck. And with the amount of laundry we do in our house it’s a blessing none of it is Rudy’s because he likes to roll in crap. Rudy is a good sport, though. He doesn’t mind sleeping on the floor or eating the same food ad nauseam, but he really doesn’t like it when I brush his teeth.

We’re all lucky that we don’t have to give Rudy medicine ten times a day, like we do for Calvin, and he hardly ever gets sick. If he does—and it’s usually because he ate something unspeakable when we weren’t looking—we just wipe it up, he’s fine, and we go on with our business. One of the best things about Rudy is that we don’t have to change his stinky diapers. And the best things about Calvin are his smiles, his giggles and his hugs.

Nope, kids aren't much like dogs but they're both pretty great to have at home, to play with and to love. 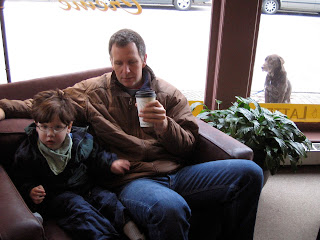