friday faves - if it were mine

When I was in high school I worked as a lifeguard at several community pools. It was at one of those pools when I first encountered a child with Down syndrome.

I don’t remember his name, and his age was unclear, but I suppose he was a teenager. He'd appear often on the pool deck, drop his towel, whip off his shirt and take a running dive—more like a painful belly-flop—into the water. He’d swim flat-out with windmill arms for about ten lengths before hopping out, beet red. Then he’d dry off, don his shirt and exit as swiftly as he had arrived. I have thought of him often over the years wondering what his parents were like, who his friends were and what he liked to do besides swim.

Throughout my college years I continued to meet a handful of other youths and adults with Down syndrome, mostly at grocery stores, bagging my food items or retrieving carts with what seemed to me great care and pride. I happily engaged with them if they showed any interested.

And while watching the film Fried Green Tomatoes nearly twenty years ago I was quite moved during a particular scene. In it, Jessica Tandy plays Ninny Threadgoode, an old woman living in a nursing home who, at one point wearing a bright smile, talks about her child in a soft southern drawl:


When he was born, the doctor said it would be best if I didn't see him. He said his mind wouldn't develop past the age of five, and I should put him in an institution, because the burden of raisin' a child like that would be too great.

She went on to say:


I smiled at him and I asked for the baby. Why, from the minute he was born, Albert was the joy of my life. The Lord's greatest gift. I don't believe there was a purer soul on this earth. I had him with me til' he was 30. Then he went to sleep and he didn't wake up. Sometimes I can't wait to get to Heaven to see him again.

That scene left an enduring impression on me though it would be years before I had a child of my own.

My observations and encounters—and subsequently the film scene—came together into a kind of mosaic that compelled me to ask myself, even as a young person, what if I had a child with Down syndrome? I wondered if I might become depressed, fall into a downward spiral and plunge deep into a black despair. Might I run away or kill myself? My answer was always a resounding "no."

No, I wouldn't. I'd remain the hopelessly optimistic person I have always been. I would prove to be a wonderful mother to this child. He would become the light of my life and I would help him realize his full potential. I would love him for all of his features unique to him.

Thinking back, I am thankful that these questions occurred to me. I have no idea whether my peers pondered these same kind of realities. Calvin doesn't have Down syndrome, but was I having some sort of premonition about him? I don’t think so. My query might be more adequately explained by the fact that I have always thought it paramount to consider the life of another and wonder how it would be if it were mine.

Please share Calvin's story. Help bring us one step closer to a cure for epilepsy during this brief campaign by donating at: http://www.calvinscure.com 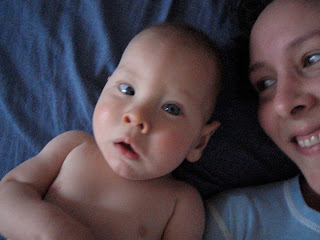