more of the same

I’m sitting here just before eight a.m., about an hour after having given Calvin his seizure meds. Three tiny white pills, two and a half salmon-colored tablets and two and a half powder blue ones go down the hatch. He mostly refuses his honeyed Greek yogurt lately so instead I sink the pills into a few bites of applesauce that I must coax into him. The damn drugs have totally messed with Calvin’s sense of taste, appetite or both, and he’s become a little string bean of a boy.

It’s five degrees outside, the sun just coming up over the tops of the trees, blobs of snow still perched like little white caps atop thin, curled-up rhododendron leaves. Calvin wouldn’t eat—again—so we put him in his johnny-jump-up to spin at his heart’s delight. I can see the drugs gradually wash over his brain turning him from a happy, almost manic, kid to one lost in some sort of pathetic oblivion, slouching floppily in his jumper. He stares at his hands or at the blue felt elephant rattle clipped to the jumper’s strap. Usually he likes rattling it though mostly he prefers chewing it until it’s sopping wet. Some mornings, like today, he appears mesmerized by the plaid patterned fabric of the plush toy, glaring at it in the grasp of his motionless, red hands. I often wonder if this behavior is some sort of seizure, so I rise up, go to him and try for a response. Sometimes he lifts his head with a faint smile while at others he keeps his chin buried in his blue velour robe as if unaware of my presence.

But then, especially when I put on Joni Mitchell’s Court and Spark, he perks up, spins, marches in place, yanks off his slippers and tries to eat them. “No slipper sandwich,” we say, whisking them out of his choppers hoping he hasn’t already taken a chunk out of the rubber sole or spongy upper. He rubs his forehead and eyes with the heel of his palms, kicks the wooden floor hard with his foot. Because of the drugs a constant film of drool coats his chapped chin, so much so that we must slather it in greasy Aquaphor and wrap his cute little bird neck in rolled-up cotton kerchiefs to keep his shirt from soaking.

I wonder what today has in store for us. More of the same, I think to myself, more monotonous traipsing around behind Calvin as he pads throughout the house in search of nothing, like some drugged up mouse in a maze trying in vain to find the cheese but never getting there, just retracing the same steps over and over without making progress toward the goal. If only he’d sit still and let me read him a book like he used to before these drugs. If only I didn’t have to tell him not to bite things every few minutes. If only he could walk around and play by himself so that I could attend to things like chores or reading or writing or cooking. Hell, I’d even be happy plunking him down in front of a television if he’d watch it, and I can’t stand TV.

Instead, we’ll be joined at the hip or, rather, shackled together like a couple of jailbirds marching endlessly around a walled-in cell block, no escape in sight. The only way out of this prison of seizures and mind-numbing drugs is a cure that, miserably, we simply don’t have.

Help bring us one step closer to a cure for epilepsy. During this brief campaign please give what you can to epilepsy research at http://www.calvinscure.com 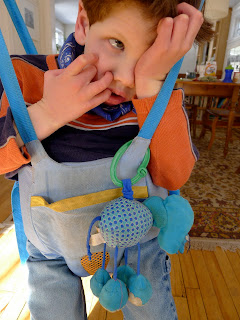