On the end of the phone a man’s stern voice asks, “who’s this?” I reply, knowing it’s my brother Matt, “who’s THIS?” Then he tells me that I should identify myself, so I say that I’m his worst nightmare. “Nope, my worst nightmare is a dirty diaper,” he quips, meaning our mother’s.

He went on to tell me, with a half-pathetic chuckle in his voice, that he found shit in Mom’s bathroom sink the other night, that she’d tried to stuff it down the drain. After the initial amusement, all I could say was a pitiful, “Oh, Matt.”

It seems that Mom had a bit of a setback—if you can call it that considering Alzheimer’s is a progressive disease—since returning home from a holiday trip with my sister to visit my brother Scott and his family in Tucson. “Day after she came back she couldn’t get out of the bed,” he added. My heart sunk and I could feel soft furrows gathering in my brow. He suggested I come for a visit within the next several months while she still has traces of decent cognitive and physical function.

I spoke with my mom on the phone the next day. With some coaxing she remembered my name. Her voice was lower—slower than usual—when I asked her how she was feeling, to which she said fine. “What’s the weather like, Mom?” Stumbling over her words, she said something like, “I can’t tell because they aren’t there.” I figured she must have meant the windows. “What’s not there, Mom?” to which she answered, “The lions.” I’d noticed recently that she’s been having more difficulty describing things, but now it appears as though real confusion is setting in.

Matt and I had compared caregiver notes. I told him that Calvin could walk, by himself, up the stairs holding the banister, though slowly, not consistently and not without a spotter since he falls so frequently. Matt seemed impressed. He described how he and his wife Stacey had installed some railings in their home for Mom’s safety, but that within a year she might be in a wheelchair. “Calvin’s goin’ up while Mom’s goin’ down,” he said. They’re like two big babies, I thought. We feed and clothe them, help them walk around to keep them fit, help them into their jammies, tuck them in and kiss them goodnight. I told Matt I loved him and thanked him for taking care of mom, and that I wished there was something I could do to help. He offered that he couldn’t help me with Calvin either, then added something like, “You should thank Stacey because she’s a goddamn saint for what she does and has to put up with,” and, because of Calvin, I know what he means. At least I think I do.

I thought about the novel Times Arrow by Martin Amis in which life’s trajectory is backwards, the main character getting younger with each passing year—not unlike Benjamin Button—and eventually dying when he enters his mother’s womb. Yep, Mom’s on her way back to the womb of the earth, I think. I hope, at a certain point, she goes there fast.

Mom used to talk a lot about how she didn’t want to live once she started forgetting things, people. I hope to hell she doesn’t have to suffer a prolonged period of confusion and unhappiness. I thought about the autumn of 2010 when my sister and I took her on an Alaskan cruise. She’d snuck to the bathroom in the middle of the night, somehow avoiding the booby-trapped scarf and umbrella we’d rigged to wake us up in this event. She had clogged the toilet requiring the plumber to visit our room at two in the morning. Mom, in utter shame, whispered to Caron, “I just want to die,” then luckily proceeded to forget all about it.

Just after I got off the phone with my mom, Calvin’s bus pulled up. Cindie, his driver, asked how I was doing, noting my sorrowful face. I mentioned my mom and how she’s deteriorating. Idling the big empty bus at the curb, Cindie told me that her mom suffers from Alzheimer’s, too. I shouted over the diesel engine that I hope my mom goes quickly, just like she’d always wished, and that (gesturing) maybe I’d need to give her a swift kick in the butt off of some cliff one day to save her from the misery she has always dreaded. Cindie said something like, “Let me know when, I’ll bring my mom and we’ll do a twofer.” “Yeah,” I said, “like Thelma and Lousie,” and we both laughed miserably, blew each other kisses and she sailed off down the street. 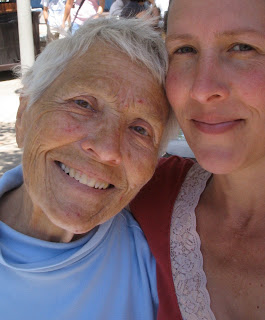